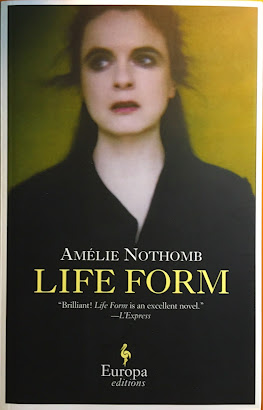 In Life Form, the character Amélie Nothomb (sort of to be confused with the author, but not completely) receives a letter from Iraq, from Melvin Mapple, who writes, "I'm a private in the US Army...I've been posted in Baghdad ever since the beginning of this fucking war, over six years ago."

She decides to write back.

The correspondence is basically the book. It turns out the Melvin Mapple has become terribly obese--this was a problem among American soldiers in Iraq, though Mapple is an extreme case--and is unhappy with the whole situation. Though both are now against the war, Amélie tries to help him make sense out of the situation.

I thought the letters from Mapple were brilliantly convincing. They sounded like I would imagine a fairly literate, but not especially educated, young American writing. So all kudos to Nothomb, but then also to the translator, Alison Anderson.

This is the second novel I've read by Nothomb and I've seen the movie version of a third. She's a Belgian writer now living in France, so generally is the Amélie Nothomb character in the books. Nevertheless they are clearly fiction. Pétronille, that I read earlier, was funnier, but the Iraq War and obesity are not exactly funny subjects.

Still Melvin's obesity gets transformed into an artistic statement against the war, which is a little funny, and allows for witty double-edged observations on the nature of art.

"I had not known how to provide him with one essential artistic quality: doubt." [64]

The novel ends in a surprising twist.

I don't think either Life Form or Pétronille are considered among the very top Amélie Nothomb novels, yet I found both of them funny and thoughtful. They're also short and easy-to-read. But if she gets better than these, she could be very good indeed. Hygiene and the Assassin, The Prince's Act, and especially Fear and Trembling have all won major French language prizes.

Not sure about that picture of her on the cover, though.