Love In The Time of Cholera

"Take advantage of it now, while you are young, and suffer all you can, because these things don't last your whole life." 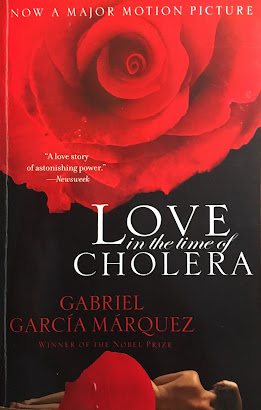 Love in the Time of Cholera is funny, romantic, and wise about love in all its seasons: young, old, and in-between; in sickness and in health, etc.

But I also have to admit I had higher hopes for the book.

In the approved fashion, the book begins in medias res, or not exactly the middle since our main characters are in their 70s, but certainly not at the beginning nor at the end.

Then Dr. Urbino dies in a tragic, but also comic, accident involving a parrot.

The chapter ends and the novel flashes back to when Florentino and Fermina first met as teenagers and they fell passionately in love. He lurks where she might see him; composes a violin sonata in her honor and plays where she might hear it; and most of all, writes her love letters, dropping them off where he knows she will find them.

Eventually Fermina's father gets wind of this budding romance and drags her off--Florentino is a bastard son and has yet to make his fortune--and Florentino is left in Colombia, heartbroken. (That's Florentino's mother quoted at the top.)

Trips to remote lands so that one party gets over some inappropriate love is a frequent trope in novels and we know how that works in general: it doesn't. Except this time it does. Fermina comes back two years later, looks at the badly dressed Florentino, figuratively slaps her forehead, and says, "What was I thinking!"

At the end of the book, the novel returns to the now mature romance of Fermina and Florentino. This newly refounded romance surprises, and is also handled with tenderness and humor.

It's all the stuff in the middle I had my doubts about. Florentino makes his everlasting pile in the steamboat business. That was expected. He romances some vast binder of women--we're given a number--but all that flesh never diminishes his longing for the lost Fermina. (Well, maybe once, a little bit, but before long he returns to Fermina even in his thoughts.) It was not very convincing, but worse: I thought it was dull. I'd have liked better a book that was a hundred pages shorter with less incidencing in the middle.

The Other Reader read the book earlier in the year and liked it better than I did. One question we discussed was how seriously were we to take Florentino's writing talents. I thought we were to assume he was effective: the start of Fermina's love is with the letters. Well, they were teenagers, perhaps not especially discriminating, but it certainly wasn't his clothes, or his looks, or his manners that Fermina found engaging. Later we learn that Florentino writes love letters for hire in town; they work; and several love matches are engendered by the letters he wrote. He becomes the godfather to a child whose parental romance he facilitated. The widowed Fermina is appalled by Florentino's proposal after the funeral; understandably; Florentino is balding and constipated and not the substance of love, but it's his written philosophical meditations on mortality that first put Fermina back on the hook.

The Other Reader, though, argued that none of these people are especially discerning; that we're told Florentino read everything, even the worst sort of romantic trash, and modelled his love letters on that.

I dunno. I suppose a book that people can read differently in serious ways has something going for it.

If you've read it, what did you think?