"Nothing can match the elation of the chronically melancholy when joy arrives." 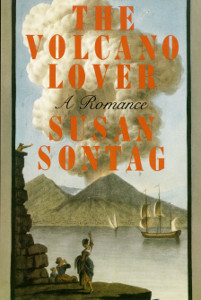 I've been on a bit of a Susan Sontag kick lately; after I'd been waiting a while, my library coughed up Benjamin Moser's recent biography. When I saw it was 'in transit' I read some of Sontag's essays; before I got to Moser's description of that period in her life, I decided to read The Volcano Lover. It first came out in 1992. Sontag was 59.
The story is set in the Napoleonic era; its basis is the love triangle of Sir William Hamilton, English ambassador to the kingdom of Naples, Emma Hamilton, the most famous beauty of the day, and Lord Nelson. Sontag gives herself a good story and good characters to start with.
Moser tends to read all of Sontag's books as if they were disguised autobiography (post on his biography coming soon?) and, while I didn't mean it to, that colored my reading of this. That quote above is Sir William Hamilton in the novel, but it might very well have been about Sontag herself when this, her third novel, was a critical and commercial success.
But even without Moser's help you might be inclined to read this as disguised autobiography. Sontag deliberately flirts with that sort of reading. Like Proust writing his book where the narrator is Marcel. The opening:

"It is the entrance to a flea market. No charge. Admittance free."

"But I would be entering it here. In my jeans and silk blouse and tennis shoes: Manhattan, spring of 1992."

Call this narrator 'Susan' if you like. She portrays herself as a collector, at least potentially: postcards of movie stars, Navajo rings, World War II bomber jackets, knives, model cars, cut-glass dishes, Roman coins. The things one might find at a flea market. But notice how our collectibles are moving back in time. We then drop some space and switch to the collector that is the main character of the novel, Sir William Hamilton:

Most of the novel takes place in Naples; Hamilton in addition to collecting pictures and statuary, studies Vesuvius, the volcano outside of Naples. He's the volcano lover. (Ignoring metaphorical readings.) He thinks of himself at times as a new Pliny the Elder, though he doesn't plan on dying in an eruption.

Sontag never refers to Hamilton as Hamilton; he's always the Cavaliere. Emma Hamilton is the Wife, and Nelson is the Hero. Other characters from the historical record are given their actual names, but the center of the drama is shifted a bit into an archetypal space.

It's Hamilton who's Sontag's historical alter ego, and it's Hamilton who's given the most space, and who's the best portrayed character in the novel. The first section, a hundred pages or so, shows him with his first wife, unwell and eventually dying. They were in love, she more than he, but his grief is genuine.

Then Emma comes into his life. Except for small items such as her beauty and her intelligence, Emma is not exactly marriageable in 1791. She'd been the painter Romney's model, known to be the mistress of various men, born way over on the very wrong side of whatever tracks there might have been. Hamilton is independent enough to not care. He accepts he will never be able to present her at court in London, though he does eventually in Naples. Emma comes to love him.

Then Nelson comes to Naples. And here's the hole at the center of the novel. It's a romantic triangle. Sontag has emphasized the archetypal nature of the triangle. But the three of them all get along. It's very annoying. I also wasn't really convinced.

I've never read anything about the real persons who appear in the novel. Maybe they did all get along. But there's not much subtlety here. The Cavaliere is convincing as a character. The Wife, less so; and the Hero, not at all. There's drama and tension in the novel, real human relations: the Cavaliere and his first wife; Emma and her mother. Sontag writes fiercely about the atrocities perpetrated at the fall of the Parthenopean Republic, with Nelson taking a good chunk of the blame. But the main romance I just found dull, which seems wrong.

Ah, well. The beginning was good. The end was good, too: it ends with retrospectives written by dead characters, including the Cavaliere's first wife, whom I was happy to see more of:

I was his first wife.

I was plain. I was often unwell. I was devout. I loved music. He married me for my money. I fell in love with him after we were married. My God, how I loved him! He grew to love me, more than he had expected."

Overall I quite liked it, but curiously more for what happened at the margins than at the center.