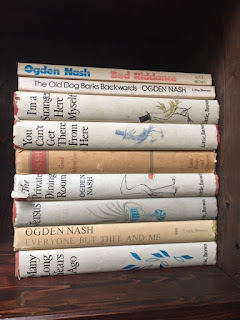 Medusa and the Mot Juste

Once there was a Greek divinity of the sea named Ceto and she married a man named Phorcus,
And the marriage must have been pretty raucous;
Their remarks about which child took after which parent must have been full of asperities,
Because they were the parents of the Gorgons, and the Graeae, and Scylla, and the dragon which guarded the Hesperides.
Bad blood somewhere.
Today the Gorgons are our topic, and as all schoolboys including you and me know,
They were three horrid sisters named Medusa and Euryale and Stheno,
But what most schoolboys don't know because they never get beyond their Silas Marners and their Hiawathas,
The Gorgons were not only monsters, they were also highly talented authors.
Medusa began it;
She wrote Forever Granite.
But soon Stheno and Euryale were writing, too, and they addressed her in daily choruses,
Saying we are three literary sisters just like the Brontës so instead of the Gorgons why can't we be the brontësauruses?
Well, Medea may have been mythical but she wasn't mystical,
She was selfish and egotistical,
She saw wider vistas
Than simply being the sister of her sisters.
She replied, tossing away a petrified Argonaut on whom she had chipped a molar,
You two can be what you like, but since I am the big fromage in this family, I prefer to think of myself as the Gorgon Zola. 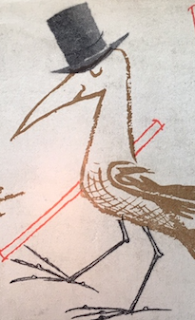 Since I was just looking at the outside of my Ogden Nash books, it naturally followed I started looking at the inside, too. And even though those outsides are by Maurice Sendak as it turns out, the inside is the real deal here. I thought about posting some old favorite: 'The Termite', say, or 'Portrait of the Artist as a Prematurely Old Man', but then this one caught my eye. An elaborate set-up for what is, in the end--ahem, wait for it!--a cheesy pun...simply couldn't resist. This poem comes from The Private Dining Room and other verses, of 1953, and is part of a series on 'Fables Bulfinch Forgot'.

Poem For a Thursday is a meme founded by Jennifer of Holds Upon Happiness.