We had some friends over last night for drinks and snacks--and mosquitoes. A couple of them were knitters. I couldn't contribute much to that part of the conversation except to say that, in the last two mysteries I read, the murder weapon was a knitting needle... 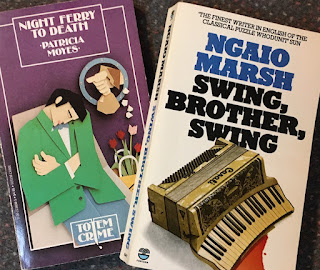 Chief Inspector Henry Tibbett of Scotland Yard and his wife Emmy are able to slip away for a quick vacation to the Netherlands. They see the tulips, visit friends, have a nice dinner out. The last day of their vacation, there's a robbery at one of the major diamond dealers in Amsterdam.

But that's not Henry's concern, right?

Ha. On the ferry back one of the passengers is stabbed in a sleeping cabin with a knitting needle. The body is only discovered as the ship is docking in Harwich. The sleeping cabin requires a special ticket to enter and the purser said no one went in or out all night. So there's a limited number of suspects, though that includes Henry and Emmy.

But where is the knitting needle? And where are the diamonds? (Because of course they're involved.)

There's a few more bodies along the way before Henry solves this one, and it includes another trip to the Netherlands to meet with the diamond merchant.

Pretty fun. But if I was Emmy Tibbett, I'd be terrified to go on vacation. A bunch of Patricia Moyes' mysteries begin when Henry and Emmy are traveling.

This one starts with an amusing epistolary section to give us the exposition: Félicité has fallen in love with Carlos, an Argentine accordion player in a swing band. Her mother disapproves. Her stepfather, the eccentric Lord Pastern and Baggott is indifferent to the potential marriage; he just wants to sit in with the band. So Félicité's cousin Carlisle is summoned in an attempt to talk some sense into her. Another cousin Edward Manx, plus various swing band members are on the scene as well. Various romance possibilities are in the offing.

Lord P&B's musical debut occurs in a club. They've planned some stage business where our lordship will shoot Carlos in the middle of his hot solo. The gun is supposed to be loaded with blanks...but you know how that goes.

Or maybe you don't, because instead of an actual bullet replacing one of the blanks, the murderer has rigged up a projectile involving a knitting needle. Lord P&B duly kills Carlos, but did he mean to? Or did some other murderer tamper with the gun?

And, as it turned out, Chief Inspector Roderick Alleyn of Scotland Yard and his wife Troy had hoped to slip away for a simple night out at a jazz club...

Alleyn, after the usual banter with Br'er Fox, his assistant, solves this. Of course. Still not sure why the gun was stuffed with a knitting needle rather than just putting a bullet back into it.

Marsh is knowledgeable about and sympathetic toward performers, and is again here, though her life was more involved with theater than music. But her attitude toward the upper classes sometimes brings out the Marxist in me, and halfway through I was half-hoping one of the aristos had done it. But you can't always get what you want... 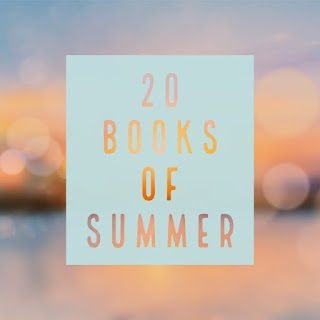 One of the last night's knitters asked, so were the murderers women? Now that would be telling...