"The chief point and the point to which I have always directed my course, is independence. And a man is independent if the hut he lives in is his own." [65] 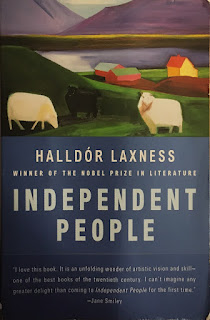 That's Bjartur of Summerhouses speaking, the protagonist of Halldór Laxness' Independent People, and the most independent of the lot. After eighteen years of indentured servitude, he owns his own croft and flock of sheep.
You learn what it's like to live in a thatched roof croft in a remote valley far from Reykjavík. It's around the year 1900. It's not pleasant. Cooped up all winter with wormy sheep, a leaky roof, and a fire that smokes. This is realism.

But it also connects to a more mythic era in Iceland's history. Bjartur composes poetry in the old style; I think it's supposed to be pretty good in Icelandic. People do actually believe in elves and trolls. The land Bjartur's house is on is supposedly cursed by Saint Columba (Columcille in Irish) who has been re-branded by the locals as the demon Kolumkilli. Bjartur sneers at this as mere superstition, but isn't entirely able himself to disbelieve.

The Fell King (a neighbor, always referred to as the Fell King, and at this time Bjartur's father-in-law) goes on after Bjartur makes his declaration:

"The love of freedom and independence has always been a characteristic of the Icelandic people. Iceland was originally colonized by freeborn chieftains who would rather live and die in isolation than serve a foreign king. They were the same sort of men as Bjartur."

Ah, Bjartur, the iconic Icelander. But then the Fell King goes on to ask his daughter Rosa, Bjartur's wife, how she likes life in the croft.

So, the book is grim, mythic, and often laugh-out loud funny.

Rosa dies in childbirth, but the daughter survives. Bjartur names her Asta Sollilja, ('beloved sun lily') a rather exotic name. She's the beginning of a considerable amount of flower imagery.

Some years pass, and Bjartur has remarried. Now in addition to Asta Sollilja, he has three sons who have survived their infant years, Helgi, Gvendur, and Nonni. His second wife's mother also lives with them. There's some comic business with a cow--Bjartur is very much a sheep man--whom the local grandee tries to give to Bjartur. Bjartur insists on paying for the cow, though he can't really afford it. (There's also backstory here between Bjartur and the grandee.) Briefly life looks up with the cow, but then an especially bad winter comes that nearly wipes out Bjartur (and does wipe out some of the family.)

The co-op movement comes to Iceland; Bjartur remains loyal to the merchant from whom he buys goods and to whom he sells sheep. The co-op movement is much celebrated in Denmark; it's a bit more ambiguous in the novel. Eventually World War I comes and in Iceland, which remained neutral, it's suddenly boom times.

Bjartur: "Oh, let them squabble, damn them. I only hope they keep it up as long as they can. They aren't half so particular about what they eat now that they're face to face with the realities of life. They'll eat anything now. They'll buy anything from you. Prices are soaring everywhere. Soon they'll be buying muck from your middens." [374]

Not the usual view on the first World War, but not necessarily wrong for that...

Bjartur is stubborn and sure of himself. How good a man is he? He does real damage. Both his wives die young, and while the poverty is so great that high mortality is unsurprising, Bjartur bears some responsibility. "You've always been a cross-grained swine," someone tells him at some point, and it's true.

He meets with triumph and disaster, and mostly treats those two impostors just the same, but not entirely. His opinions get him and others into trouble, but if he'd stuck to his opinions (especially on debt) just a little more, he might have been better off. But it's also the case that forces outside of his control, that are too big for an independent person, dominate his life. Well, the novel did come out in two parts in the 30s. Maybe it was important to gang together to deal with tough times. The fates of Bjartur's three sons suggest the possibilities of rural Icelandic crofters at the time.

The reprint edition has an introduction by Brad Leithauser, which is interesting and informative. Leithauser met the author late in Laxness' life--Laxness was already starting to suffer from the Alzheimer's that would eventually do him in:

"When I spoke of my admiration for Bjartur, a look of perplexity gave way to one of alarm. 'Oh, but he's so stupid!' he [Laxness] objected.

'Oh, but he's so wonderfully stupid!" I replied, and the old man peered at me and pondered darkly a moment; then his features cleared and he abruptly laughed with pleasure."

That does give a good sense. But on the whole the introduction gives away too much. It's not especially a plot-driven novel, but there is one half-hidden mystery that is gradually revealed over the first third of the novel, and it's not until near the end that we fully understand what Bjartur knows. Leithauser spills the beans. Save the introduction for an afterword.