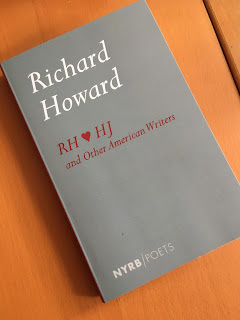 II
Laukhuff's Bookstore. I am fourteen, I live
on the Diet of Words, shoving a ladder around
high shelves while the German ex-organ-maker
smokes with a distant nightmare in his eyes
("You have heard of Essen," he murmurs, "you never
will again": it is nineteen forty-three),
his body on hinges, his elbows hovering wide
over the Jugendstil bindings (Werfel, Kraus...)
like a not-quite-open penknife. "Hart Crane?
He came here to marry the world...You understand?
Maritare mundum: it is the work of magic,
Mirandola says it somewhere, to marry the world...
And not much time to do it in, he had
to read all the books, to marry, then to burn,,,
It is one kind of greatness to grow old--
to be able to grow old, like Goethe;
it was Hart's kind to refuse. You understand?"
Laukhuff is asking me, laughing through smoke
his postponing, renouncing laugh. No, I don't--
that much I do. I climb down, clutching The Bridge
and hand it over. "Will I understand this,
Mr Laukhuff? Should I buy it?" "Cross it first.
You won't, but there is a certain value, there is
poetic justice in the sense of having missed
the full meaning of things. Sure, buy it. Spend
all you have, your mother will give you more."
The German penknife closes with a click.
Marriage, Hart. The endless war. The words.
Cleveland was our mother-in-lieu. We left.

I've been reading a lot of Richard Howard lately.

'Decades' is about Howard's lifelong engagement with Hart Crane, author of The Bridge. Both Richard Howard and Hart Crane grew up in Cleveland. The poem consists of five sections--this is the second--set at ten year intervals. Each section is three nine-line stanzas of accentual pentameter, plus the final couplet, generally unrhymed. 'Decades' was first collected in Fellow Feelings, 1976, though I have it in the New York Review Books selection.

Howard's poems are often long (and so hard to quote). Many are dramatic monologues or duologues (think Robert Browning) with some spoken by famous figures, such as Walt Whitman, Henry Irving, or Edith Wharton. This passage is a little funny (I think) but he's often laugh-out-loud funny.

And Laukhuff's Bookstore! It closed before I was even born in a city I've never been to and now I miss it.