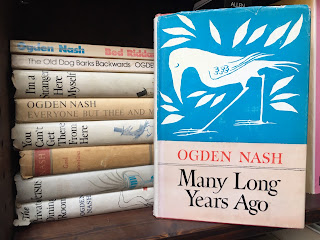 Portrait of the Artist as a Prematurely Old Man

It is common knowledge to every schoolboy and even every Bachelor of Arts,
That all sin is divided into two parts.
One kind of sin is called a sin of commission, and that is very important,
And it is what you are doing when you are doing something you ortant,
And the other kind of sin is just the opposite and is called a sin of omission and is equally wrong in the eyes of all right-thinking people, from Billy Sunday to Buddha,
And it consists in not having done something you shuddha.
I might as well give you my opinion of these two types of sin as long as, in a way, against each other we are pitting them,
And that is, don't bother your head about sins of commission because however sinful, they must at least be fun or else you wouldn't be committing them.
It is the sin of omission, the second kind of sin,
That lays eggs under your skin.
The way you get really painfully bitten
Is by the insurance you haven't taken out and the checks you haven't added up the stubs of and the appointments you haven't kept and the bills you haven't paid and the letters you haven't written.
Also about sins of omission there is one particularly painful lack of beauty,
Namely, it isn't as though you had a red-letter day or night every time you neglected to do your duty;
You didn't get a wicked forbidden thrill
Every time you let a policy lapse or forgot to pay a bill.
You didn't slap the lads in the tavern on the back and loudly cry Whee,
Let's all fail to write just one more letter before we go home, and this round of unwritten letters is on me.
No, you never get any fun,
Out of the things you haven't done,
But they are the things that I do not like to be amid,
Because the suitable things you didn't do give you a lot more trouble than the unsuitable things you did.
The moral is that it is probably better not to sin at all, but if some kind of sin you must be pursuing,
Well, remember to do it by doing rather than by not doing.

-Ogden Nash
There's been a bit of Ogden Nash in the air lately, and I just couldn't resist...
This is from his book Many Long Years Ago, which came out, many long years ago, in 1945.
Posted by reese at 12:07 PM