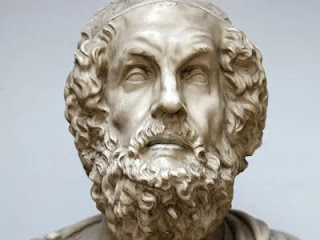 Mimnermus is an ancient Greek poet about whom almost nothing is known. The Suda, the Byzantine encyclopedia, says he lived around the 37th Olympiad, which occurred in 632-629 B.C. He may--or may not--have lived in Smyrna (now in Turkey). His works only survive in quotations from other authors. This, which is generally labeled as Mimnermus 1, (and may be a complete poem--we don't know) is found in the Florilegium of Johannes Stobaeus, a collection of fragments assembled around the fifth century A.D.

What? You don't want to deal with that great wodge of ancient Greek up there? No? Conveniently...I wrote a translation which came out here earlier this week.

What is life? What's joy? When golden Aphrodite's gone,
I'd rather die should she fail to fire me.
Hidden kisses, cajoling gifts, and bed, those are
the blossoms we kids grabbed so greedily,
girls and boys both. But then tedious old age attacks--
it makes a man both worthless and ashamed--
so much does stressful care abrade your ability
you hate to look upon the sun enflamed.
You're boring to boys, no longer glorified by girls;
miserable age--god's gift!--has you tamed.

Possibly 'then' in line 5 should be 'when', I went back and forth on that. Line 9 could also be thought of as children and wives rather than the more explicit reading I gave it. Then it would be something like 'hated by your kids, dishonoured by your wife.'

Still thinking about Propertius is how I got to this. In his ninth ode in Book I, Propertius says he prefers Mimnermus to Homer. That's supposed to be a bust of Homer up above, though we don't have any idea what he looks like either.

Asses of Parnassus is a pretty fun poetry website. One of my poems came out there earlier. More are yet to come. So pay attention! 😉
Posted by reese at 1:58 PM