Erle Stanley Gardner's The Case Of The Deadly Toy 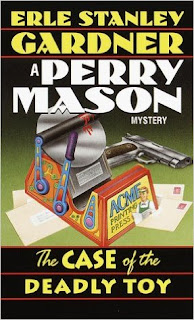 The Case Of The Deadly Toy came out in 1959 as the first of three Perry Mason novels that year. The television series had already started. My general feeling, based on reading a bunch, but not all--how many people have really read all the Perry Mason novels? and it must be asked, why would you?--is that the later ones are hastier and less strong than the early ones.

But I thought this one was pretty good.

The initial exposition is blunt but brutally effective and takes up sixteen pages in my edition. Norda Allison (her interesting name seems to have been simplified to Claire for the TV episode) discovers her fiancee Mervin Selkirk is a bit of a thug when he slaps his son from a previous marriage for little cause. She breaks it off; her new boyfriend has his jaw broken by her ex-fiancee, and she's lured from San Francisco to LA for a scheme by Selkirk's ex-wife to wrest custody of the son from Selkirk. She's sympathetic but almost immediately she recognizes there's something screwy going on, and goes to Perry Mason.

At that point, of course, you know she'll be accused of murder and that's she's innocent.

Even worse from the very first page, I knew who the murderer was. The Perry Mason novels typically give a cast of characters at the very beginning. From that two line description it was obvious who was the murderer, I'm afraid, and I wasn't wrong.

But none of that matters. One comes to Perry Mason mainly for the wit in the dialog, but also for the completely ridiculous, probably illegal, turns that Perry pulls to confound Hamilton Burger. Both were successful in this case, and Perry's shenanigans did double duty in that they irritated the rich and obnoxious father of the victim as well as Hamilton Burger.

And speaking of double duty, this novel works for me both as an item in my scavenger hunt, and as clearing out my TBR list. Even though there's not supposed to be any blood on the toy printing kit pictured on the cover, there clearly is, so we'll count it for that:

Both of the books I've read so far the TBR challenge came into my library in 2016. That hardly feels like backlog, but by the rules of the game it counts, so this is also for My Reader's Block Mount TBR Challenge. But the next one might have to be been hanging around for a bit longer. And that's only two out of thirty-six, and January is nearly over. I may need to pick up the pace...
Posted by reese at 1:52 AM