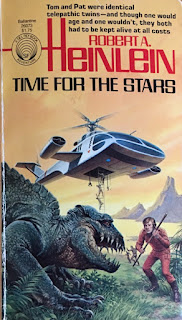 According to their biographies, Destiny's favored children usually had their lives planned out from scratch. Napoleon was figuring out how to rule France when he was a barefoot boy in Corsica, Alexander the Great much the same,  and Einstein was muttering equations in his cradle.

Maybe so. Me, I just muddled along.

...is the beginning to Robert Heinlein's Time For The Stars of 1956.

I have to say I was pretty amused by the sly way in which the narrator compares himself to Napoleon, Alexander, and Einstein. Two conquerors and a scientist. It's a boy's adventure, but for a boy good at math. We'll see if it can maintain that high level.

Book Beginnings on Fridays is a bookish meme hosted by Gilion at Rose City Reader. To play, quote the beginning of the book you're currently reading, give the author and title, and any thoughts if you like.
Posted by reese at 1:43 AM