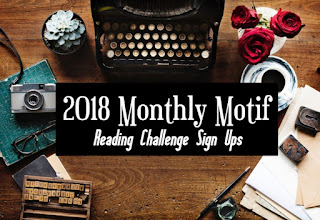 I saw this at MyReadersBlock and I thought this challenge from girlxoxo looked like a fun way to add some other categories to my reading list, so here I go with another challenge.

The challenge is to read one book for each of the twelve monthly categories listed below.

I'll pick as I go along because if I tried to decide now I'd change my mind for sure. But Alan Hollinghurst and James Baldwin are floating high in my TBR pile at the moment, so January will likely be one of those two. (James Baldwin would double count in the category!)

JANUARY – Diversify Your Reading
Kick the reading year off right and shake things up. Read a book with a character (or written by an author) of a race, religion, or sexual orientation other than your own.

N. K. Jemisin's The Fifth Season
FEBRUARY – One Word
Read a book with a one word title.

I'm in the middle of three books with one word titles as I write this, but the shortest one got finished first...

Matt Cohen's The Bookseller
MAY- Book to Screen
Read a book that’s been made into a movie or a TV show.

We got this from the local video store a couple of years ago when the Other Reader (cf. Italo Calvino's If On A Winter's Night A Traveler) read it. The DVD was flawed and we got our money back, but from what we could see, it was a great movie. They're doing an Italian retrospective at TIFF Lightbox here in Toronto over the summer, and I'm planning on seeing it properly on the big screen when it appears later this summer. Burt Lancaster as the Prince, and Claudia Cardinale, too!
JUNE- Crack the Case
Mysteries, True Crime, Who Dunnit’s.

Should be an easy category for me; this is the first mystery I read this month.
JULY – Vacation Reads
Read a book you think is a perfect vacation read and tell us why.

Because I get to read undistracted at the cabin!
AUGUST- Award Winners
Read a book that has won a literary award or a book written by an author who has been recognized in the bookish community.

Muriel Barbery's The Elegance Of The Hedgehog

What better than....
Bram Stoker's Dracula
OCTOBER- New or Old
Choose a new release from 2018 or a book known as a classic.

How 'bout a Nobel Prize winner?

Let's restructure the family according to our new dystopian principles!

Margaret Atwood's The Handmaid's Tale
DECEMBER- Wrapping It Up
Winter or holiday themed books or books with snow, ice, etc in the title or books set in winter OR read a book with a theme from any of the months in this challenge (could be a theme you didn’t do, or one you want to do again).

Nicholas Blake's The Corpse In The Snowman
Posted by reese at 12:14 AM