Erle Stanley Gardner's The Case of the Rolling Bones 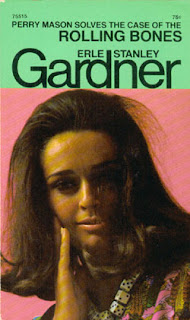 The Case Of The Rolling Bones is a Perry Mason mystery of 1939. I use 'a' deliberately. Though I didn't actually check, I doubt it was the only one. Are Gardner's books the only ones that also give the month as well as the year of publication? He may be one of the few authors that needs it. For what it's worth, this was Gardner's book of September, 1939. (An otherwise ominous month.) It was *probably* the only one that month...

On the whole it was a medium good entry. Alden Leeds is an elderly man with a somewhat mysterious past who struck it rich in an Alaska gold rush in 1906. He's unmarried and the rest of his family likes it that way. Then he takes it into his head to marry a girl he knew from a dance hall back in Alaska--she's younger than he is, but not young--and the family decides, conveniently, he must be crazy. It's this that brings Perry into the case.

Leeds is also being blackmailed over that mysterious past and it's the blackmailer who gets killed. And Leeds is the prime suspect, and it's up to Perry to get him off.

There was some reasonably well-done fair-play cluing in this one, which is not a thing I usually associate with Gardner's mysteries. And the old coot quotient was high in this and they were amusing. It's Gardner and I could hunt up examples of slapdash construction, but if you know the Perry Mason series at all you wouldn't be surprised. Enjoyable.