Barbara Tuchman's The Guns of August 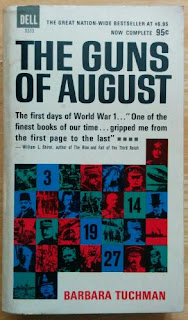 The Guns of August (1962) is Barbara Tuchman's history of the opening of World War I. The first ninety or so pages in my edition of just under 500 pages are devoted to the situation in the main combatant countries in the years before the war. The rest of the book is devoted to the first month of combat and mainly to that on the Western front. The book ends with the end of August, 1914. The German assault on France has failed to take Paris or to destroy the French army, and the war will now settle down into the trenches in which the bulk of it was fought.

But that first month was exciting and Tuchman does an impressive job with it. It's touch and go whether the Germans would capture Paris and knock out the French in their opening push, and while we know the outcome, both sides were uncertain until the last minute.

Tuchman has clear favorites--she's an Anglophile and clearly likes Generalissimo Joffre of the French--but her irony undercuts and complicates her favoritism, especially in the battle scenes. Of one British officer, she writes: "...with that marvelous incapacity to admit error that was to make him ultimately a Field Marshal." She's good on the fog of war, the incapacity to make happen what you intend, to even understand what is happening. "Arguments can always be found to turn desire into policy," she writes of the German navy, but it could very well serve as a catchphrase of the book.

I do wish my edition had better maps; I'm reading the one that looks like that above, the paperback printing from the sixties. There are maps, but they're grainy and hard to make sense of. I also wish she'd done more with Austria-Hungary, which, after all, is where the war actually started. I'd recommend Christopher Clark's The Sleepwalkers on the opening of the war before battle, who's also very good and more sympathetic to Austria-Hungary's situation.