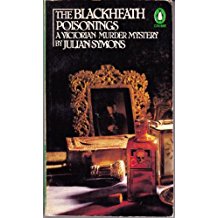 The extraordinary series of crimes popularly called the Blackheath Poisonings took place in the early 1890s at a time when the Mortimer family had lived in that suburb on the edge of London for nearly half a century.

...is the beginning of Julian Symons' The Blackheath Poisonings: A Victorian Murder Mystery.

Symons' mystery came out in 1978 and as such is going to count for the Silver Age of Vintage Mystery challenge. Symons does not write series novels (which I generally prefer) and I've only just started, so I can't say much at this point. I've liked the other mysteries of his I've read, plus he's contributed mightily to the non-fiction history of the genre.

Book Beginnings on Fridays is a bookish meme hosted by Gilion at Rose City Reader. To play, quote the beginning of the book you're currently reading, give the author and title, and any thoughts if you like. What? It's not book beginnings on Saturdays? Oh, well, better late than never...
Posted by reese at 2:07 PM