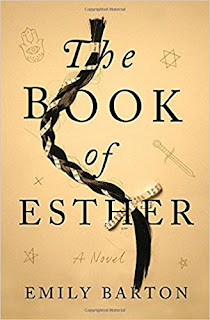 Dim pricks of blue light shone through the shutter's decorative punchwork. Careful not to wake her sister, Esther braced her hand against one door while she drew back the other. The wooden panel stuck a moment before popping free, letting in the damp, salty air and a view of purplish sky.  To the east, the sun cast its first pink glow over the place where the mighty River Atil spilled into the Khazar Sea. Esther raced through her morning prayers, her voice a sibilant whisper.


...is the beginning of Emily Barton's The Book of Esther.

I don't know if that beginning by itself would be enough to get me to read this, but I read Barton's first two novels and really liked them. Barton writes a sort of historical alternative world. Her first novel, The Testament of Yves Gondron, takes place in an English village lost to the modern world--their technological level is early medieval--that's stumbled on by a Harvard anthropologist. In Brookland, her second novel, the Brooklyn bridge is built, out of wood, by the daughter of a brewer a hundred years before the one we know. In this, her newest novel, according to the blurb, the early medieval, possibly Jewish, state of Khazar survives until 1942 and World War II. The novel came out in 2016 and I just got it from the library.

This will be my third (!) Khazar novel, after Milorad Pavic's Dictionary of the Khazars and Michael Chabon's Gentlemen of the Road.

I'm looking forward to it.

Book Beginnings on Fridays is a bookish meme hosted by Gilion at Rose City Reader. To play, quote the beginning of the book you're currently reading, give the author and title, and any thoughts if you like. Did you hear the one where a priest, an imam, and a rabbi walked into a central Asian state?
Posted by reese at 3:19 AM