Ellis Peters' Black Is The Colour Of My True Love's Heart 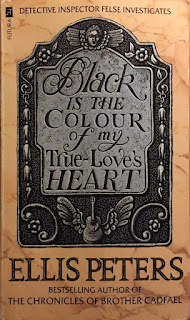 Black Is The Colour Of My True Love's Heart (1967) is an Ellis Peters' mystery from her other series. What? There's something other than Brother Cadfael? It was only after I finished the Cadfael stories that I began looking around.

The other series (there are also some one-offs, plus a historical novel or three) is based on Detective Inspector George Felse, with his wife Bunty, his son Dominic, and in this one, his son's girlfriend Tossa, all contributing to the solution. This is out of the middle of the series and is the third I've read. They're set in the present; Black is set (as you might guess from the title) at a folk music festival in the sixties. Dominic and Tossa are in attendance, but when one of the performers disappears and some bloodstains are found by the riverside, Dominic decides his father should be called in, despite any clear evidence of a crime. Well, of course, he was right when he did it. They find the body.

Some of the late Cadfaels have almost no mystery; the charm (which I still find considerable) is to see how Brother Cadfael plays matchmaker and to pick up a bit more of his complex backstory and maybe learn a little history. Black has a bit more mystery going. Lucien Galt is a folk singer, charming but very taken with himself, and we are shown a number of people with potential motives for his murder in the early pages: an ex-lover, a married woman who appears to be his current lover, her jealous husband who is also the music retreat promoter, a besotted teenage girl, and an irritating radio personality.

In presenting the setup, there's also some mild satire on the folk scene of the sixties. That was the weakest part of the story. I don't think Peters is a natural satirist, and I wasn't entirely convinced by the characters. Also all the Felses are just a little too sweetly understanding. Peters can't really bear to write a proper villain or even somebody a bit irritable. But the mystery plot I thought was quite strong, and when that got going, the story got much better. Several twists I didn't expect.

The story is also, it seems, a retelling of a traditional folk ballad, not one I'd ever heard: Gil Morice (Child ballad number 83). So if you know that ballad you'll know the motivation for the crime, though not the actual outcome, because there's also a twist on that story. But Peters does manage the pathos of an old murder ballad.

And Peters does put together one pair of potential lovers in the end.

Vintage Mystery Challenge. Silver. When. During a special event (folk music festival).
Posted by reese at 1:45 AM