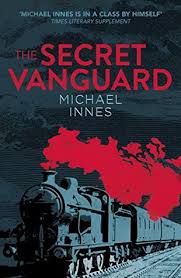 Peaceful is the the first word which a house-agent would have chosen in describing the home of Philip Ploss.

Well, now, you just know something bad is about to happen, don't you? (Not to mention the cover.) The first chapter tells us more about Ploss, that he inherited a competence, but isn't fantastically rich, that he earns a little money writing poems about buttercups and daisies that are considered old-fashioned and harmless, that he likes to take the train to London and see friends at his club.

Then (bonus quote!) there's the beginning of the second chapter, page eight:


"Ploss," said John Appleby deliberately. "Philip Ploss, the Cow-and-Gate poet. Who would want, now, to shoot a quiet fellow like that?"

I guess I'm going to find out!

Book Beginnings on Fridays is a bookish meme hosted by Gilion at Rose City Reader. To play, quote the beginning of the book you're currently reading, give the author and title, and any thoughts if you like. It seems I'm in for another Innes.
Posted by reese at 12:01 PM