In My Father's Court

"No man is judged in his hour of grief." 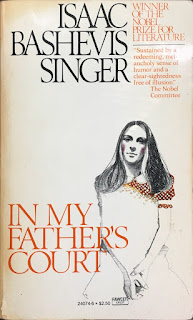 Those are the words of Singer's father when he hears a woman curse after her son had committed suicide.

Isaac Bashevis Singer has been on my mind lately. Various bloggers have been reading I. B. Singer (and also I. J. Singer); the Other Reader has recently finished Enemies, A Love Story and that's been a topic of dinner conversations. I was spouting off about his memoir In My Father's Court, and also Shosha, but then I wasn't really certain I'd read In My Father's Court. (I'm quite sure about Shosha. A great novel.) The database says I hadn't, but I thought I remembered parts of it. It's possible I didn't complete it previously, or it's also possible the database was wrong.

I went through a serious Singer phase in the 80s--this was when a friend suggested I should try reading a living author before they won the Nobel prize--and read a bunch of them. They're generally great.

In My Father's Court runs from Singer's earliest memories--he was born in 1902--until the end of World War I. The book is a series of short pieces that first appeared in Yiddish in the Jewish Daily Forward in the 60s (under a pseudonym) and were then translated into English before being collected into book form. Singer's father was an impoverished Hasidic rabbi who moved the family to Warsaw before the war; his mother was the daughter of a more prestigious Hasidic rabbi from Bilgoray in southeast Poland.


"The book tells the story of a family and of a rabbinical court that were so close together it was hard to tell where one ended and the other began. The rabbinical court, the Beth Din, is an ancient institution among the Jews...The Beth Din was a kind of blend of a court of law, synagogue, house of study, and, if you will, psychoanalyst's office where people of a troubled spirit could come to unburden themselves."

And, perhaps we can add, a good training ground for a future writer.

There are stories of his father deciding in cases of divorce, wills, Talmudic disputations. At the same time events happen in their lives: his sister, his parents' first-born, marries into a Jewish family in Amsterdam and moves there. His brother, Joseph, ten years older, loses his faith, becomes a communist and an artist (he both writes and paints; now he's more famous for his writing); I. B. is studious, is fascinated by Jewish traditions, but at the same time reads Dostoevsky, gradually begins to doubt, discovers girls. The greatest part of the episodes take place in Warsaw, on Krochmalna Street, in the Warsaw ghetto. But during World War I, after Warsaw falls to the Germans and Austria-Hungary takes Bilgoray, it becomes possible to travel to his maternal grandfather's home, and with food short in Warsaw, he goes with his mother and younger brother to the country. The book ends with them in Bilgoray and his father and older brother still in Warsaw.

Very good and very touching. I'm not quite sure what the cover has to do with the book--though what do covers ever have to do with books?--unless it's the last lines:


"Suddenly I was dazzled by a particular narrow face, a dark girl with coal-black eyes and an indescribable smile. I became confused and when she asked me a question I did not know what she was saying. Many novels and a lot of poetry had filled my mind by then; I was prepared for the turmoil that writers call 'love'..."