"As for feeling thwarted and useless, he knew what it meant. It meant that he was in touch with reality."

I read this book too fast, which is a good sign in a novel, but makes it more difficult to write about. Oh well. It is a very good novel.

Joe Hackett was a kid in the 1920s. His father owns the town's coal delivery service and they're reasonably well off. The family is Catholic, and young Joe plans to grow up and be a businessman like his father--or a priest.

A priest is what he becomes.

At the seminary Joe is part of a crowd (which includes Cooney, Mooney, and Rooney!) that aspires to an ascetic sort of sainthood. There's some amusing by-play about who gets to keep the hair shirt. (It's funny in context...ya gotta believe me...) One of the circle goes on to join the Trappists, but Joe becomes a regular priest, serving first as a curate, then in an office with Catholic Charities, finally in charge of a parish of his own.

Powers made a specialty of priests and the bureaucracy of the church; his debut novel Morte d'Urban (1962) is, for my money, a masterpiece of the first rank. He's funny and touching both; his priests are imperfect, but well-meaning. The church bureaucracy is...a bureaucracy, just like a lot of other bureaucracies.

Still this is quite different than Morte d'Urban. Fr. Urban Roche is a mover and a shaker; he's climbing up the church hierarchy, while struggling to maintain his goodness. Fr. Joe Hackett never means to be ambitious in that way; once he's passed on his youthful dreams of an austere sanctity, he means only to be a good priest and he's interested in 'priestly fellowship.' But he's a bit unsocial and insecure; that's his thought in the statement I quote above; and those things he feels strongly about--anti-militarism, and that the church shouldn't appear money-grubbing--aren't going to endear him to his fellow priests or the church hierarchy in the 50s and 60s. There's a funny bit in the middle where he excitedly learns he's going to have a curate--a fellow priest!--but he fails to learn his name, and is too shy to ask when the curate does show up.

Eventually he does learn his curate's name--Fr. Bill Schmidt--and tells Bill to invite his seminary friends round to the church for dinner; Bill does, but then the younger contingent all retreat to Bill's room, leaving Joe to watch the Twins on TV by himself. No priestly fellowship.

A couple of crises happen: since he's socially maladroit, he takes to drinking too much, and probably qualifies as an alcoholic. He's set up a scheme whereby his parishioners contribute yearly and aren't dunned for money from the pulpit, but higher assessments from the diocese messes up his arrangement; and the son of a local reporter (the reporter is also a bit of a friend) is going to dodge the Vietnam draft and comes to Joe for advice; that reporter/father is gung-ho for the U.S. involvement in Vietnam. Can he resolve these and still be a good man and a good priest?

Well, the ending is positive, but the future is not certain. This passage comes from near the end. Greg is that draft-dodger; at this point Greg's in Montreal, working at a Dorothy Day Catholic Worker charity, and Joe has just finished helping out for a couple of weeks during his vacation:

The final chapter shows him keeping it up.

The title comes from an old hymn; the book prints the first verse and I suppose that's a clue to how the novel should be read:


Now the green blade riseth
from the buried grain,
wheat that in dark earth
many days has lain;
love lives again, that
with the dead has been:
Love is come again like
wheat that springeth green. 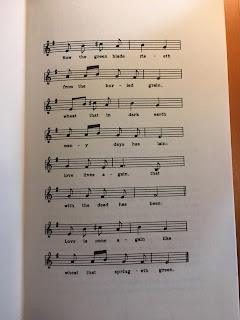 Highly recommended, though I would recommend Morte d'Urban even more.
Posted by reese at 12:09 PM