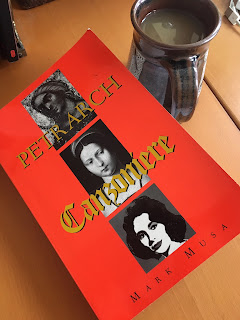 Gluttony, sleep, pillows of idleness,
have banished every virtue from the world
whereby our nature, conquered by its habits,
has almost lost its way along the road;

so spent is every good light from the heavens
which should inform our human life that he
is pointed out as some remarkable thing
who would make water flow from Helicon.

Who wishes for the laurel, or for myrtle!
"In poverty and naked goes Philosophy,"
the masses bent on making money say.

You will have few companions on that road,
so all the more I beg you, noble spirit,
do not abandon your magnanimous task.

Petrarch to a friend thinking of abandoning the writing of poetry.

This edition is from University of Indiana Press, translated and annotated by Mark Musa, with an introduction by Musa and Barbara Manfredi. This edition a bit overdoes the notes, I feel, but still, perhaps useful: the friend to whom this poem is addressed would seem to be unknown. Helicon is the spring sacred to the Muses.

I also am not sure what Warhol's Liz Taylor is doing on the cover.

My knowledge of Italian from the 1300s is strictly limited, but I do think magnanimous is probably not well-chosen, though it fits his blank verse scheme. The Italian is magnanima, it looks alike, but magnanimous has a very specific meaning in English these days. At the very least I think the force of the original Latin words in magnanima would be much more present for Petrarch's audience, more than we sense in magnanimous now. Think 'great-souled.'

The Italian, for whom it's useful: