The Dance of the Intellect among Words, or Thinking about Propertius

Round, round, the roof does run;
And being ravished thus,
Come, I will drink a tun
To my Propertius.

-Robert Herrick, from 'To Live Merrily, and to Trust to Good Verses'

The only literary celebration of the spins that I know of.

The word around town these days is that I've become lazy
and that Cynthia must be the reason. Alas, not so.
She is as far away from my bed as the River Po
is from...What's out there, remote and exotic? The Bug!
Cynthia hasn't been feeding my passion lately. My soul
is starved for her kisses. My ear thirsts for her whispers.
It's not the way it was when we pleased each other, defying
Envy itself. It's as if some god had decided
I was in need of a little refresher course in human
pain. Or is it some herb from Prometheus' peaks
that Medea kept in her kit to interfere with lovers?
Whatever it is, I'm sadly diminished. Distance
changes a woman's heart, and the great strength of our passion
is undermined. I spend my nights alone,
morose and full of self-pity. (I begin to bore myself.)
That man who, in his pain, can complain to his mistress
who is there with him in the room, ought to be
counting his blessings,
for love, when it's sprinkled with tears, will grow like a weed.
At the worst, he can work himself up to a kind
of righteous anger,
enough to give him the nerve to break it off
and look somewhere else for love. I'm unable to do that.
For me, it's Cynthia, first, last, and always.

That's Ode 12, from Book I, translated by David Slavitt. W. A. Camps, Pembroke College, Cambridge, writes, "Very little is known of Propertius' life beyond what he tells us himself in his works." What Propertius tells us, the last line of that ode, is, "Cynthia prima fuit, Cynthia finis erit." He was in love with a girl. Cynthia. First, last, and always. (Though more literally: Cynthia was first, Cynthia will be the end.)

We can piece together a few other details. Propertius was born around 57 BC, in Umbria, probably close to Assisi. The Roman civil wars were ongoing and this was a region not yet fully absorbed into the Roman state; Propertius' family lands were confiscated for the benefit of Augustus' (still Octavian and not yet Augustus) veterans in 41 BC. His father died while Propertius was in his teens, his mother somewhat later. Still there was money enough left for him to go to Rome where he was no doubt supposed to study law or oratory or something useful, but spent his time writing poetry instead. He meets Cynthia around 30 BC.

In fact, poetry could be a paying gig at the time. His poems, all written in the elegiac meter, are divided into four books. The first, called the Monobiblos, is the one most absorbed with Cynthia, and seems to have become famous already while Propertius was still young. Which meant he caught the ear of Maecenas, Augustus' cultural commissar, and voilá, Propertius' fortune was made. Once you were in with the new hegemony...

There's not much evidence, and anyway, I'm probably entirely wrong, but I imagine Maecenas as having good taste in literature, not necessarily political, but feeling obligated to support the new way of things. By 27 B.C.--when Octavian becomes Augustus--Rome has suffered fifty, almost a hundred, years of civil war, and everyone is just so damned tired. Sure, Augustus is a square, daddy-o, but he's got the money, and he's fixed everything up real sweet, and if you just would write a few poems about how things now are cool, like it was a return the good old days, well...you know, it would help...Vergil did it, Horace did it, too. So it's OK for you, too. Propertius does appreciate the new calm, writes some 'Roman odes' in honor of the new politics, but can't quite pull it off, or maybe doesn't entirely want to. He just wants to write about a girl.

Anyhoo, that's a bit what I like about Propertius. There's a whole world there you can only get glimpses of; real people, half seen, half filled out by your imagination; people interacting with the events of the day, but not enslaved by them, still living their own romantic lives. These characters feel like real people, well, they are real people, but characters, too: Propertius himself, and Cynthia, that learned girl, but also Lygdamus, Propertius' slave--we all know about tricky servants, the Leporello type--his poetry-writing friends show up here and there, maybe some rivals in his worship of Cynthia, of whom he could be jealous--should he be jealous?--, other romantically possible girls. A whole circle. It goes on until it fades; some die; some just abandon poetry. It's Bolaño telling the story of the Visceral Realists in The Savage Detectives.

Enough for now. I've slogged at this post a while. And still I didn't get to Dante or Goethe and Ezra Pound is no more than an allusion in the title of the post. Housman. Housman remains to be considered. Imagery. Ears and boats. Maybe more Highet. I also didn't babble on about elegiacs, Goethe or Schiller or Coleridge or Clough, though I had every intention of doing so... 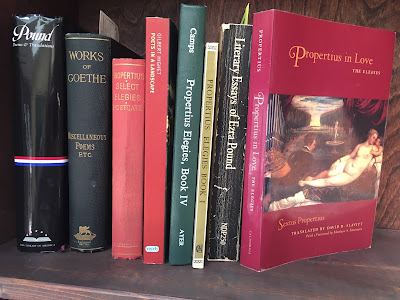 Dates, and other 'facts', taken from the introduction to Propertius' Elegies, Book I, edited by W. A. Camps, Cambridge University Press, 1961, shown above. They're reasonable, but not to but to be taken as gospel truth. The year of his birth is particularly doubtful.