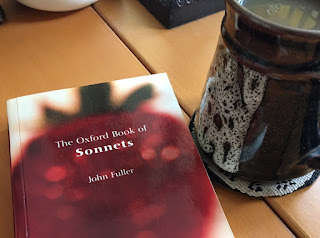 Whoso list to hunt, I know where is an hind,
But as for me, alas, I may no more.
The vain travail hath wearied me so sore,
I am of them that farthest come behind.
Yet may I by no means my wearied mind
Draw from the deer, but as she fleeth afore
Fainting I follow. I leave off therefore,
Since in a net I seek to hold the wind.
Who list her hunt, I put him out of doubt
As well as I may spend his time in vain;
And, graven with diamonds, in letters plain
There is written her fair neck round about:
Noli me tangere, for Caesar's I am
And wild for to hold, though I seem tame.

The very first sonnet in that Oxford Book of [English-language] Sonnets.

For the moment this is standing in for the fact that I finished rereading Hilary Mantel's Wolf Hall. While nobody really knows for sure who slept with whom in the 1500s, the hind of this poem is generally taken to be Anne Boleyn. Mantel certainly assumes this poem is about Anne, and alludes to it, though she also has Wyatt tell Thomas Cromwell he had not slept with her. In fact, for Hilary Mantel, Anne Boleyn is still a virgin the first time she sleeps with Henry.

If indeed this poem is about Anne Boleyn, then Caesar is Henry the VIIIth. Noli me tangere is 'Hands off!' or more literally, 'Don't touch me.'

I am intending to try to say something about Wolf Hall, which I reread recently because Brona is hosting a readalong.