Sholom Aleichem's In The Storm

"Hearken, O ye nations! Heed, O ye peoples of the world, what my mouth will utter now. Waken from your slumbers, raise your eyes, look about you and see the darkening sky. Black clouds are gathering above, a mighty wind drives them with great speed and they cover the entire sky. Soon, soon, a storm will be breaking. Soon, soon, the thunderclouds will burst and a great storm will pelt down, not of water but of blood." [187] 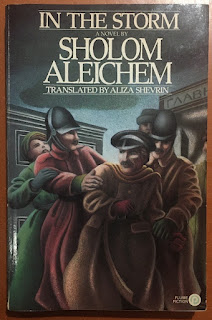 That's the storm of In The Storm, Sholom Aleichem's novel set in the year 1905. Lippa Bashevitch, an uneducated wood-hauler, has been driven half-mad by events.
But it's not all in such a high register and even Lippa can't sustain that. Immediately afterwards one of the other characters says, "Reb Lippa! Perhaps you would like something to eat?"
1905 is an important year in Russian history. Russia has just--shockingly--lost the Russo-Japanese War. The events of the Russian Bloody Sunday--where peaceful marchers in St. Petersburg are fired on by police--is an important moment in the novel. The Tsar feels compelled to offer the people, temporarily as it turns out, a constitution. "Constitutzia, constitutzia!"
(It's also the time of the movie Battleship Potemkin, though none of those events show up in the book.)
The novel starts in Kiev: "Three different Pesachs were being prepared at No. 13 Vasilchikover Street." These Passover preparations are in the apartments of Itzikl Shostepol, Solomon Safranovitch, and Nehemiah the shoemaker. (Lippa Bashevitch supplies the building with firewood.) Itzikl Shostepol is a well-to-do merchant and religious; Solomon Safranovitch is a middle-class pharmacist and secularizing; Nehemiah is poor and lives in the basement. But all three have children who are engaged with the ideological currents flowing through Russia at the time.
At the start of the novel Tamara Shostepol and Sasha Safranovitch are about to return to Kiev for the holiday from St. Petersburg where they have been studying. They arrive on the same train, and, while as far as their fathers are concerned, they're not supposed to know each other since they're from different economic classes, they do, having grown up in the same building.
The novel then flashes back to events in St. Petersburg and that Bloody Sunday in January. The second half of the novel returns to Kiev. The tsar revokes the constitution later that year and scapegoats the Jews for Russia's failures. A series of pogroms erupts including one in Kiev. Our characters have to make serious choices.
Sholom Aleichem himself lived through that Kiev pogrom, though he was well-enough off at the time to take his family and hole up anonymously in a hotel. But that was the event that led to Aleichem leaving Russia. "Palestine and America--what a choice!" [219]
Aleichem is often written off at the sentimentalizing chronicler of shtetl life, he of Kasrilevke and Tevye and Fiddler on the Roof. (Great as I find Fiddler on the Roof to be.) I already knew there was more to him than that, but still this novel was a surprise. It's a very urban setting. It also represents the division between a more politicized second generation and their more accommodationist parents, a novel of the sort you see in The Demons (Dostoevsky) and Fathers and Sons (Turgenev). It's also stylistically quite interesting, with various modes: a telegraphic biography of a police spy, e.g., or what seem to be excerpts from police reports. Reading it in translation the interplay between Hebrew and Yiddish will inevitably mostly go past me, but the translation by Aliza Shevrin seems strong and she's able to make some of that apparent. 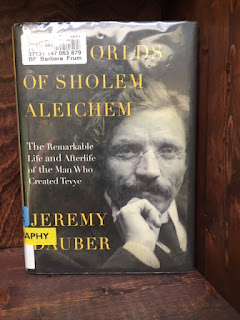 A few years ago I read Jeremy Dauber's biography of Aleichem and I got it back from the library to see what he said about the novel. The novel was first serialized in the spring of 1906 in the left-wing New York Yiddish paper Varheit, under the title The Deluge. Aleichem rewrote it before it appeared as a novel under the current title.
At that time Aleichem was new to New York, having fled the Kiev pogrom. His family was still in Europe, his older children at school in Switzerland. He had just had two failures on the New York Yiddish stage, possibly because Aleichem, not knowing New York, had offended the wrong claques. Already a pretty well-known writer, but never, it seems, very astute with money, he needed it badly at the time, and a contract for a serialized novel was a huge boon. (I also have to assume that the Yiddish press was not so well-established at the time that it could pay its authors all that well.)
Highly recommended.

Note: His name is usually transliterated Sholem Aleichem these days, but I spelled it Sholom throughout since that's the way it appears on the cover of my edition of In The Storm.