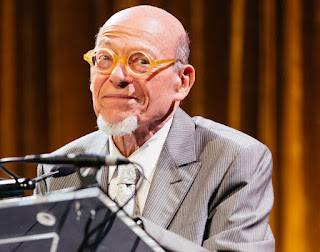 The, tragedy, Colette said, is that one
does not age. Everyone else does, of course
(as Marcel was so shocked to discover),
and upon one’s mask odd disfigurements
are imposed; but that garrulous presence
we sometimes call the self, sometimes deny
it exists at all despite its carping
monologue, is the same as when we stole
the pears, spied on mother in the bath, ran
away from home. What has altered is what
Kant called Categories: the shapes of time
change altogether! Days, weeks, months,
and especially years are reassigned.
Famous for her timing, a Broadway wit
told me her “method”: asked to do something,
anything, she would acquiesce next year—
“I’ll commit suicide, provided it’s
next year.” But after sixty-five, next year
is now. Hours? there are none, only a few
reckless postponements before it is time . . .
When was it you “last” saw Jimmy—last spring?
last winter? That scribbled arbiter
your calendar reveals—betrays—the date:
over a year ago. Come again? No
time like the present, endlessly deferred.
Which makes a difference: once upon a time
there was only time (. . . as the day is long)
between the wanting self and what it wants.
Wanting still, you have no dimension where
fulfillment or frustration can occur.
Of course you have, but you must cease waiting
upon it: simply turn around and look
back. Like Orpheus, like Mrs. Lot, you
will be petrified—astonished—to learn
memory is endless, life very long,
and you—you are immortal after all.

Richard Howard (1929-2022) passed away last week, a favorite as a poet and an important translator from the French.

As a consequence there have been links: the NY Times obituary, an article, emphasizing his Jewishness in the Forward, a conversation at a Pen event between him and Susan Sontag. That last, from which I lifted the poem, also has an amusing anecdote involving Hermann Broch: it seems Broch, assisted in his emigration from Europe by Howard's adoptive mother, flirted with her, bringing on young Howard's jealousy. To no avail. (The romance didn't come off anyway.)

I also learned that Howard's husband insisted that one book leave their New York apartment every time a new one came in. The horror! There was generally large stack of books by the door to be schlepped down to the Strand and sold.

The poem uses a syllable-counting pattern. Ten syllables in each line, though it's not five accents, and so it's not blank verse.

For Howard, at sixty-five, next year wasn't yet now. He went on well past that. But 'you are immortal after all.'