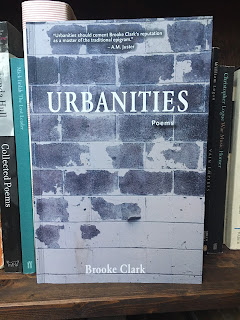 Here's my advice on how to shine on the epigram-writing scene:
a poem should not mean, or be; but it should be mean.

Take that, Mr. MacLeish! Brooke Clark's Urbanities came out from Fitzhenry & Whiteside, a small Canadian press, in 2020. It's a collection of mostly epigrammatic poetry adapted from classical models:

...so here's my pitch: I've tried to write some poems you might enjoy--
a radical idea now, to deploy
the resources of poetry, not to stretch and strain
syntax until it cracks, but to entertain.

He writes in the afterword, "The original impulse behind this book was to try to capture some of what I loved about Martial in English." (Both the poems I've quoted above are adaptations from Martial.) But he goes on, "These are not direct translations, however, and none of the poems in this book is a particularly good guide to what the original actually says."
An example of his method is his treatment of Catullus 2, the poem about Lesbia's sparrow, now a cat:
from To A Fortunate Feline

A sweet deal, Toast, being Chloe's pet:
you hop up on her lap and get
a giggle or a happy sigh;
your paw slides up her inner thigh
demesnes denied the human hand...

Catullus, at least based on where he placed Lesbia's sparrow, was more a breast man. There was also a version of Catullus 51, which is Catullus version of the Sappho poem. Clark's version begins, "That man seems like a god to me." I quite liked his two Horace adaptations, but they're a little long to quote. There's also Mimnermus (a favorite of mine in Greek), Callimachus, others.

I do wish he'd identified the poems he was adapting from. Some I recognized, but especially with the Martial poems (a poet I hardly know at all) it would have been fun to compare, but I generally couldn't.

One last Martial adaptation to end (and nearly the end of his book):

So that's my book. Such trifles don't make a literary star,
but they can't have been all bad--you read this far.
Stardom's for those whose luminous lines sear with sincerity.
You laughed a few times? Good enough for me.

Brooke Clark also edits the contemporary poetry website Asses of Parnassus, whose self-proclaimed brief is short, witty, formal poems, and so they generally are...
Posted by reese at 11:14 PM