"...let the devil of knight errantry, which has such possession of thee, take thee upon his shoulders, and carry thee full tilt wheresoever he lists." 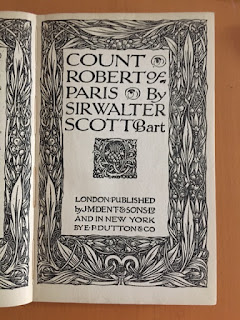 Count Robert of Paris (1832) is a late novel of Sir Walter Scott's. It's set in Constantinople at the beginning of the First Crusade (1096-1099).
Hereward, a Saxon, fought at the battle of Hastings. His father was killed there. He believes his intended, Bertha, was slain during the chaos that followed. Hereward abandons England and takes a job as a member of the Varangian Guard, sworn to protect the Byzantine emperor, Alexius I Comnenus at the time. Which Hereward does, so successfully, he's called in for an interview with Anna Comnena, composing a history of her father's reign.
And so he's caught up in palace intrigues.
The Byzantine empire at the time is caught between the rising power of the Seljuk Turks and new kingdoms in the Balkans. And then the knights of the First Crusade appear on their doorstep. Are they friend or foe? Will they attack Constantinople? (The Crusaders didn't sack Constantinople until their fourth trip through.) Alexius already has one Frank bandit/king in his dungeons, Ursel (Roussel of Bailleul) from an earlier war.
And one of those crusader knights is Count Robert of Paris. Robert is the son of William the Conqueror; Hereward's his enemy at first sight. Robert's the one that 'the devil of knight errantry' is about to carry off.
William the Conqueror did have a son Robert who did go on the First Crusade, but our Robert owes more to those tales of knight errantry, even to Don Quixote, than he does to the historical record. And his wife, Brenhilda (!) of Aspromonte, armor-clad and perfectly happy to joust in the lists, feels more like Orlando Furioso than anything historical. Though Scott is at pains to tell us there's an armor-clad female warrior by the name of Gaita in Anna Comnena's history (which I haven't read).
Robert behaves like a tool when he first gets to Constantinople, lounging on Alexius' throne, breaking ancient artworks. Alexius is irritated enough to throw Robert into prison even as he's doing all he can to move the rest of crusaders on their way.
But there's a conspiracy on to overthrow Alexius. It's led by Achilles Tatius (Hereward's commander), Nicephorus Briennius (Anna Comnena's husband and so the emperor's son-in-law), and Agelastes, the aged court philosopher. Each of them imagines he's the one that will end up on the throne, and, while Alexius would let Robert go after a bit, the conspirators plan on using Robert as part of their plot. In addition Nicephorus has fallen into lust with the amazonian Brenhilda.
You probably don't need me to tell you the plot fails. Scott isn't one to rewrite the historical record so blatantly, and Alexius' actual reign lasted until 1118. You probably also don't need me to tell you that beautiful Bertha isn't really dead, and that somehow she ends up in Constantinople, too. The cool-headed Saxon Hereward and the hot-blooded Norman Robert are forced to get along to sort this all out. Which they do.
One of the nice things about this novel is that it reminds that Scott can be funny. There's Robert, who, except for the fact that he can actually fight, could be Don Quixote. Hereward, Sancho Panza-like, is forever trying to get him to show some sense. There are couple of running gags: Anna Comnena's literary soirées bore everyone to tears, and Alexius is forever saying that if Alexa doesn't want to lose her husband she should quit forcing him to listen to her read. Well, Nicephorus does decide he prefers Brenhilda. Also the emperor can never remember Hereward's name, generally settling on Edward after trying a few other possibilities.
Now, nobody would claim this as one of Scott's great novels. His prose style is what it is--generally feeling pretty archaic now--and his tendency to write overly fulsome dialog is definitely on display here. But if you're a fan...
...I think you'll enjoy it. Anyway, I did. 😉
From my Classics Club list and this year's Back to the Classics list.
Posted by reese at 1:10 AM