I once claimed to know Latin, at least a little bit... So, OK, it's been twenty years since I dropped out of graduate school, and I've scarcely looked at anything in Latin since then, but I took a couple of Italian courses. Shouldn't that have helped?

(In fact, if anything, Italian made things worse. I already switched back and forth between ecclesiastical pronunciation and classical: should I be saying Caesar, as in salad, or Kaiser? Now our author could be any of Sissero, Kikero, and Chichero.) 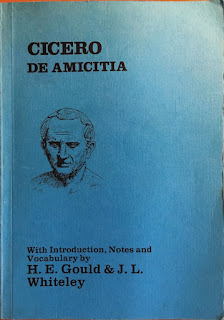 But, I thought, now that I'm in (semi-)retirement, I would write some more blog posts, read books I already own, and try to recover some of my Latin and Greek. This edition of Cicero's De Amicitia was gonna satisfy all three of those categories.

Maybe I should have just stuck to mysteries.

But at one chapter (of, on average, two pages) a day, I promised myself, even twenty-eight chapters shouldn't take too long. Three months later...

The De Amicitia is Cicero's treatise on what friendship is, what it should be, and in case there was any doubt, why we want it. It's a dialogue (like Plato) but almost all the talk is by Gaius Laelius Sapiens who is both memorializing his friendship with Scipio Aemilianus (Scipio the Younger) and describing the nature of that friendship, an ideal friendship. If this conversation had actually occurred, it would be history even to Cicero; the event would be something like eighty years before Cicero wrote the dialog. But,  of course, it's entirely made up.

My Latin remains sufficiently shaky that I hardly dare say anything about the text itself. I was struck (though maybe not entirely surprised) at how much Cicero considers friendship in its public, even political, context. Would a writer today in writing about friendship talk so much about it in its relationship to politics and class? Surely it would be considered a more private relation. Though after last January 20th, politics seems much less escapable, and something one much more wants to escape.

Again, since I'm thinking too much about politics, I noticed Cicero had a lot to say about the danger of flatterers, and how they degraded themselves.

But it wasn't surprising Cicero was thinking about politics: he was, after all, a career politician, and he was to die a year or so after writing this in the political turmoil following the assassination of Julius Caesar.

And I was also curious about the politics of Gould and Whiteley. Though I Googled a little bit, I didn't go to any great lengths to discover them, but there's probably something of interest there. What I have is a Bolchazy-Carducci reprint of a school text that came out in 1941. Gould and Whiteley's previous book was the Civil War in Spain, which I assume is the relevant part of Lucan's Pharsalia, but could be considered rather a loaded title in 1941. The introduction to the Cicero struck me as rather pro-Caesar; were Gould and Whiteley left-wing? There was also this in a note to l.6 in Chapter XI:


Cicero regarded reformers like Gracchus [Tiberius] very much as staunch conservative might feel towards an extreme left wing socialist.

which sounds rather sympathetic to Gracchus to me. Of course, it's no particular stretch to portray Cicero as a pro-oligarchical conservative, but I always enjoy reading between the lines in scholarly work; I think there's quite a lot of character to gleaned half-hidden in 'objective' scholarship. If I was more scholarly than I in fact am, I'd go find out in this case. As it is, I'll just speculate.

I could also write a bit about Ladislaus Bolchazy of Bolchazy-Carducci publishers of Chicago, whom I met once in the mid 1980s, and who gave me this edition, along with several other books they published. But that would be an anecdote, I suppose, but I'm not sure I'd go so far as to call it amusing, and this post is long enough. But I did pull their edition of Plato's Apology off the shelf, edited by James J. Helm, which he gave me at the same time. Maybe that will be my next Classical project. I've read the Apology, but not this edition, so it, too, could count for my TBR list. But give me a couple of months...

De Amicitia counts for the My Reader's Block Mount TBR Challenge.
Posted by reese at 2:15 PM