Titus Groan,  the first of the Gormenghast novels, begins thus, with a description of the castle:


Gormenghast, that is, the main massing of the original stone, taken by itself would have displayed a certain ponderous architectural quality were it possible to have ignored the circumfusion of those mean dwellings that swarmed like an epidemic around its outer walls.

Not very inviting prose, I agree. I made a list of words I was going to need to look up as I read: abactinal, clowder, anile, fuscous, spilth, marcid, scorbutic. Et cetera, et cetera. And I see now as I type my spell-checker thinks only fuscous and scorbutic are even words, but my OED was happy go give me definitions for all of them.

And yet the book shows up regularly on lists of great novels. I don't know any longer which list led me to purchase it, but I suspect it was Anthony Burgess' list of best English-language novels from 1939 to 1984 that appeared in the New York Times. And now that I've read it, I'd have to say he may be right. 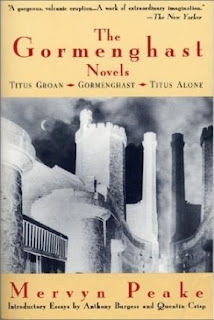 There are three novels in my edition, plus a critical apparatus. It's from The Overlook Press and it came out in 1995 with two introductions, one by Burgess and one by Quentin Crisp. It seems to be out of print now. The novels center around Titus Groan, the 77th Earl of Gormenghast. In the first, Titus Groan (1946), Titus is born, and at the age of one year and a bit, he becomes the earl when his father goes mad and dies, well, is eaten by owls. It's that kind of book. In the second, Gormenghast (1950), Titus ages from seven to eighteen or so, and leaves the castle. In the third, Titus Alone (1959), he wanders the world outside Gormenghast. Peake planned at least a fourth, and there are a few pages of it, but he was unable to finish it, dying at the age of 56 from either Parkinson's or dementia.

The main psychological tension is between the traditional ritual that the earl of Gormenghast must perform and the desire for freedom, for life. But at the same time, at least in the first two volumes, there is considerable physical tension, mostly supplied by Steerpike, who starts as a kitchen boy and ends up (with a few murders along the way) as the Master of Ritual, the most important position, outside of the family, in the castle. Titus and his mother's hunting and killing of Steerpike provides the climactic finish of the second volume. You might not guess it from the quote above, but Peake writes very well about scenes of violence and suspense.

He can also be very funny. In the second volume Titus goes to school with an array of comic pedants; after the first headmaster dies a ridiculous death--he dies standing on his head as a result of a school prank gone too far--Bellgrove becomes the headmaster, mostly known for a pain in his teeth and falling asleep in class. The sister of castle's medical doctor Irma Prunesquallor decides to throw a party with the primary intention of finding a husband; she invites the entire teaching staff of the school, all male, as the only available pool of men of neither too high nor too low a class for her to choose from. Irma and Bellgrove both come to the party determined to get married, and by the end of the party, the pact is done. She knows nothing about his teeth, and he knows nothing about the hot water bottles she was using to pad out her cleavage. The marriage is, of course, no particular success.

But especially surprisingly to me, Peake is also capable of tenderness, and this ill-starred union is treated gently.

It's all very good, really, while it's good. Unfortunately Titus Alone is not up to Peake's earlier standard. The dementia that would kill him nine years later was already making itself felt in 1959. But it's also, I think, the case that the tension of the first two novels was wound up by the need to escape the rituals of Gormenghast, and once Titus does escape, the spring was slack. I don't know. But it's certainly the case that I finished the third (shorter) novel, only because the first two were so great.

Anyway, like the fine bottle of wine it is, it's been aging on my shelf for ten years. And I figured not everything I read for my TBR challenge can be 200 pages. It's two-thirds very highly recommended, but give yourself some time to get into it.
Posted by reese at 7:46 PM