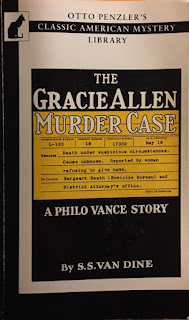 'The most asinine character in detective fiction.' - Raymond Chandler.

'Philo Vance/needs a kick in the pance.' - Ogden Nash.

A kick in the pants may indeed be called for. Here's an example of typical Vance-speak from early in this novel: "No, I did not find myself actually longin' for the spell of an Ogygian isle with citron scent and cedar-sawn--" Van Dine explained Vance's improbable drawl in the first of the novels as a remnant of an Oxford education. Not very convincingly.

What could be considered even worse is that almost all the repeating characters talk in a style too highfaluting (or, should it be highfalutin'?) for normal human beings. John F.-X. Markham, the District Attorney who features in almost all the novels, responds to Vance's statement: "I see that the clear-toned Sirens of the flowered fields have snared you...If [Sergeant] Heath's ominous dream is fulfilled we'll later be steering a stormy course between Scylla and Charybdis."

If the allusions themselves don't cause me to throw down the book in appalled disgust, you can chalk it up to my spending formative years reading the Odyssey...

And there's not much relief from the highfaluting. Sergeant Heath talks in a working class dialect that's equally hokum, and the narrator/character S. S. Van Dine (referred to in the novel as 'Van') writes in an overwrought style as well.

So, you ask, what the heck?

Well, The Gracie Allen Murder Case (1938) is the next to last of S. S. Van Dine's Philo Vance murder mysteries, so I must admit to a certain amount of compulsive completism here. And the general poop is that the later ones aren't as good as the earlier ones, and my experience is the general poop is generally right.

But back in the day, they were enormously popular. Almost all the books were made into movies. Willard Huntington Wright (the actual person for whom S. S. Van Dine is a pseudonym) could write a novel with his friend Gracie Allen in the title and get her and her husband George Burns to play the roles he wrote for them. The fact that such noted figures Raymond Chandler and Ogden Nash needed to comment is further evidence.

More interestingly for mystery readers, the Ellery Queen novels start out as an attempt to write a Philo Vance-like mystery, and clearly Dannay and Lee were influenced by Van Dine. Much too much so, you will probably say, in their first couple of novels. (When was the last time you read The Roman Hat Mystery?) But the Van Dine novels were also remarkable in the excellence of the fair-play plotting. Couple that with an amusing pastiche of feckless intellectuals and you start to get something of the Ellery Queen magic, even if, you might say, it took Dannay and Lee until Cat of Many Tails to perfectly sort out that combination.

As for this one itself? I liked it better than all of that might indicate. If you're new to Van Dine, definitely start with the first three, which were written as a unit. This is a locked-room case, with the unlocking of the room being particularly un-mysterious, I'm afraid. But there are some well-done bits as to who the victim was and where the murder was committed. On the comedy front, I'm afraid I found all the Grace Allen/George Burns stuff not that funny. Ditzy wife jokes are (fortunately) now mostly passé, and my generation's George Burns played God rather than a grouchy husband. But I was quite amused by criminal mastermind Owen the Owl, who when he finally starts speaking, after looming ominously over half the novel, is suffering from existential despair, and starts talking like some comic cut-rate Nietzsche.

Anyway, being a completist has its rewards...

Thanks to Bev at My Reader's Block and the Random Number Generator for making this appear in my mailbox earlier this year.
Posted by reese at 11:17 PM