Simon Brett's Murder In The Title 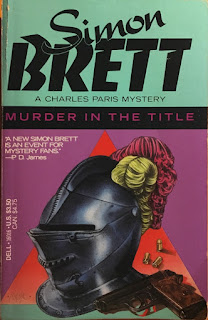 Murder In The Title (1983) is the ninth of Simon Brett's Charles Paris mysteries. Paris is a not very successful actor, with a taste for murder investigations and repeated opportunities to get involved in them.

In this one, Paris is acting in a provincial revival of a not very good play titled The Message is Murder. He plays the dead body that falls out of a closet in the first act and that's his sole contribution. The play itself is a country house murder, and there will be a couple of other murders in the play. The lines of the play are amusingly bad, and the acting is, too

The first victim is, almost, Charles Paris himself. He's waiting in his closet, about to fall out of it, dead, when a sword comes stabbing into the closet. He's only saved from being pierced and actually dead because he's falling-down drunk and had sunk to the bottom of the closet. He doesn't say anything to anyone, because nothing fatal happened, but he starts to look around.

There are tensions. The creative director of the theatre is borderline incompetent and doesn't get along with the new general manager. The playwright is an aging lecher who is chasing after all the actresses in the play to no avail. Everyone knows that the location of the theatre is in need of urban renewal, but if the theatre were once torn down, it would not be replaced.

There's a second near fatal accident on stage, and then the creative director is found dead, shot, in what initially appears to be a suicide, and what may actually be a suicide on further investigation.

I first came across Simon Brett's mysteries a while back; I thought here's a mystery series with jokes, a thing I like. At my favorite six mysteries for a dollar annual book sale, I bought a bunch, but I gradually went off them, and there have been some unread ones here for a while. The jokes, it's the jokes you see, they tend to repeat and they're a little heavy-handed.

But on the other hand the plots turn out to be pretty good, better than needed for this sort of thing. You could see where this one was going, but the twists at the end were successfully twisty, and if Paris' solution does depend on a couple of convenient coincidences, well, they're not too, too improbable. (Though why Charles Paris' London lawyer friend should have exactly the Australian theatre director Paris needed to talk to in his office at the exact moment he calls is, well, let's say it's an indication of how small the theatre world really is? Hmm?)

Though that knight's helmet is more prominent, it's not a full suit of armor, and it's yet another example of a cover that hasn't got much to do with the novel inside, so I'm going to use the semi-automatic pistol for the category Any Other Weapon. That at least was the weapon that killed the one dead person in the book.

Also for My Reader's Block Mount TBR Challenge.
Posted by reese at 2:17 PM