"...as a tribute to the lofty idealism of his literary production and to the sympathy and love of truth with which he has described different types of human beings." 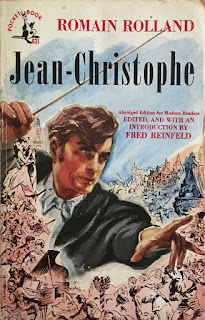 That's the dedication for Romain Rolland's Nobel Prize in Literature of 1915. It was largely a prize for his novel Jean-Christophe, serialized in the French magazine Cahiers de la Quinzaine from February of 1902 to October of 1912, and subsequently issued as ten short-ish novels.

Jean-Christophe Krafft, generally referred to as just Christophe, was a musician born in Rhineland Germany around 1870. He flees to Paris when he's young, wanted for taking part in a riot against soldiers stationed in his home town. Later he flees to Switzerland after taking part in a May Day riot in Paris. He also lives for a while in Italy. He has deep friendships and loves, but mostly he composes music and conducts, eventually achieving success and renown. The novel is Christophe's story, but it is also the story of art and culture in Western Europe from 1870 or so to 1912. The handsome, dynamic, heroic figure on the Pocket Book cover is the image Rolland wants to convey. But at the same time Christophe can be short or haughty with people, has a temper, is complicated.

Rolland conceived the novel as a scholarship student in Rome in 1889 and began it not long after during a trip in Switzerland. After his scholarship was done, he came back to Paris and taught music history at various schools, ending up at the Sorbonne. He wrote plays that went nowhere, and biographies (of Beethoven and Michelangelo among others) that did little better. It wasn't until Jean-Christophe was in progress that he had any reputation; but then...

I took pages of notes as I was reading this, copied out passages, read a biography by Stefan Zweig from 1921. I don't mean to burden you with all of this; I only mention it to suggest that it is a novel that I thought well worth reading; its current obscurity is undeserved. It was both affecting and thought-provoking.


That's not to say that it's perfect. Rolland doesn't write well about women, and the female characters too often rely on clichés. If you imagine a continuum between writing too specifically and too generally, Rolland is way over on the side of generalities. (Put Tom Wolfe--or Gary Shteyngart in his newest, Lake Success--with the endless use of brand names, on the side of too specific.) But still Rolland creates characters you care about, and the ending, with the death of Christophe, is powerful.

The novel also needs to be retranslated. The only translation into English, the one I read, is by Gilbert Cannan, and was done as the novel was coming out in the early 1900s. At every translation to burgess for what was bourgeois in the original I cringed. Even where it's not bad, it's out-of-date.

So I would not want to tell you it's a Drop-Everything, Read-Now novel; it's not Anna Karenina or War and Peace by Rolland's master Tolstoy; it's not the equal of Thomas Mann's Doctor Faustus, though it's hard to imagine Doctor Faustus without Jean-Christophe. I only want to suggest that you leave space for it, don't forget it's there, if you're looking for a long novel with characters you care about and insight into its time's art and culture. Something challenging but engaging. A novel about an artist. 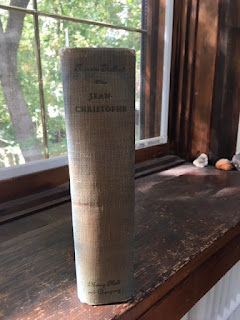 Though I find the cover above cool, that's not the edition I read. I bought that for a dollar yesterday (with a bunch of other books...) at the University of Toronto University College book sale pretty much so I could take a picture of it. (Still going on through Sunday for those of you in the Toronto area!) I read the much more boring-looking edition shown. (No abridgements around here! The full 1600 pages for us!)

I discussed the first parts in two earlier instalments. The first three novels (Dawn, Morning, Youth) are looked at here. The next four (Revolt, The Market Place, Antoinette, and The House) are here. I may write a post on Zweig's biography; I'm also reading Rolland's collection of articles against the militarism of World War I, Above the Battle, which may get posted on as well. Everything Rolland-related at the blog should be available here. I found this at the Nobel Prize site informative.

And that's the third-longest book on my Classics Club list done! Woo-hoo!