The Gate of Angels

"I can't live without Daisy, Fred thought. There is no God, no spiritual authority, no design, there are no causes and no effects--there is no purpose in the universe, but if there were, it could be shown that there was an intention, throughout recorded and unrecorded time, to give me Daisy." 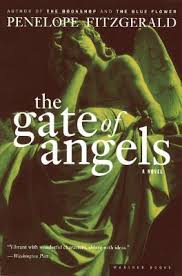 And since it's the one I've just finished, just now it's my favorite Penelope Fitzgerald. I might change my mind next week, though, because they're *all* so very good.

Whew. OK. I've got that out of my system.

The Gate of Angels is Penelope Fitzgerald's next to last novel; it came out in 1990. It takes place in 1912, in Cambridge, where Fred Fairly has a junior fellowship at the fictional St. Angelicus, better known as Angels. It's the smallest of Cambridge's colleges, and 'as on Mount Athos, no female animals capable of reproduction were allowed on the college premises.' Well, since we're told that on the third page, we have a strong suspicion how that will go...

The other major character is Daisy Saunders who's grown up poor in London; her mother has died just before the opening of the novel (we see the event in a flashback) and Daisy gets into a training program as a nurse. Men are always after her, but only to make her a kept woman, or possibly a less exalted status even than that. One of them is Kelly, a newspaper publisher, and out of desperation she agrees, but before anything can happen...

Fred and Daisy are involved in an accident when an unlit wagon runs into their bicycles. They're knocked unconscious and carried off to a neighboring house and put to bed. The same bed, and both naked. (The owner of that neighboring house assumes, incorrectly, they were married and bicycling together.)


You can see the outlines of the romcom plot at the heart of this. But the quote at the top also highlights another aspect of this short, but packed novel: Fred's loss of his Christian faith. (He's the son of a small-town rector.) Cambridge at this point is a hotbed of research into the new physics that will later be more thoroughly codified by Einstein. The Michelson-Morley experiment is a topic of discussion and the Nobel laureate J. J. Thomson is on campus. Can one do science and believe in the soul? Fred decides no. But Fred's mentor, Professor Flowerdew, tells him that "to base one's calculations on unobservables--such as God, such as the soul, such as the atom, such as the elementary particle--was nothing more than a comforting weakness. 'I don't deny that all human beings need comfort. But scientists should not indulge themselves on quite this scale.'" Thus lumping together the soul and the atom. Modern science is no better. Is love such an unobservable?

The ending of the novel is deliberately uncertain. Nobody walks down the aisle to be wed at the end, at least within the frame of the book. But I, for one, am pretty sure it's going to happen, and that yes, there is an intention, a purpose in the universe.

The second in a short series of Daisy novels.
Posted by reese at 2:10 AM