"I wish to boast that Pygmalion has been an extremely successful play, both on stage and screen, all over Europe and North America as well as at home. It is so intensely and deliberately didactic, and its subject is esteemed so dry, that I delight in throwing it at the heads of the wiseacres who repeat the parrot cry that art should never be didactic. It goes to prove my contention that great art can never be anything else." 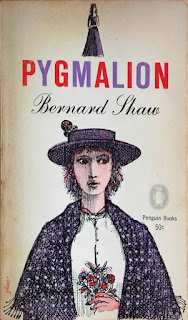 What with the movie versions (especially My Fair Lady), Pygmalion is too well known in one form or another to need any summary from me. You know what happens: Liza learns "English."

What I will say is how good a read I found it. (Not so dry a subject as all that.) I'm usually a little doubtful about reading plays--all dialog and no description make them harder for me to sink into--but I didn't find that a problem with Pygmalion at all. Of course, Shaw's stage directions are so very extensive, it is practically a novel, albeit a bit dialog-heavy by most novel standards. I've never seen a stage version, but the set descriptions, with the amount of the furniture specified for numerous sets, would seem to make it rather a challenge to put on, at least adhering to Shaw's intentions. It may be more like what he wanted as a movie anyway. (Though he's supposed to have hated Hollywood, and disdained the Oscar he got for his screenplay.)

I will also say, Shaw clearly has some opinions about apostrophes, but I couldn't figure out what they were. "Dont," "havnt," "lets," but "he'd" and "I'm." I could not figure out what his rule is. I almost accused my version of being badly proofread, but it's probably not true. I'm sure the information is available somewhere, but it wasn't evident to me.


"Nonsense! Time enough to think of the future when you havnt any future to think of."

"Oh, if only I'd known what a dreadful thing it is to be clean I'd never have come..."

and for you #Dewithon19 readers:


"Sentimental rhetoric! That's the Welsh strain in him. It also accounts for his mendacity and dishonesty."

I'd also say, Oh, George. Never explain. The afterword tells us who Liza Doolittle marries and everything that happens afterwards. But the play proper ends with the question of who Liza marries (if anyone) up in the air. (As does My Fair Lady, though as for that, does anyone really doubt Audrey Hepburn's about to marry Rex Harrison as Henry Higgins?) Shaw's afterword (from 1942) was mostly a disappointment.

But, on the whole, what an incredible hoot.

This is so very London a play with the opening scene in Covent Garden and much discussion of the Cockney accent, but Shaw was born in Dublin, so it will be my contribution to #ReadingIrelandMonth2019. I had higher hopes for doing a bit more Irish this month, but it didn't happen. It's also a book off my Classics Club list: