The Painter of Signs


"Living on the river, he occasionally entertained himself by watching the bathers, and was fairly accustomed to the sight of the human figure in the wet; but it always ended in self-criticism. He wanted to get away from sex thoughts, minimize their importance, just as he wished to reduce the importance of money. Money and sex, he reflected, obsessive thoughts, too much everywhere - literature, magazines, drama, or cinema deal with nothing but sex all the time, but the female figure, water-soaked, is enchanting." 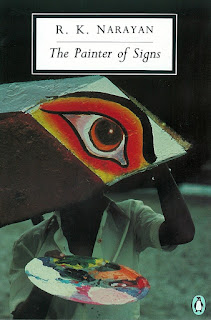 Those are the free indirect thoughts of Raman, our titular protagonist, from early in R. K. Narayan's The Painter of Signs. He's about as successful with that renunciation as you might imagine.

The novel came out in 1976 and is set during the years of Indira Gandhi's prime ministership. Raman lives with an aunt who does his housekeeping; he's an independent businessman--if that's not too exalted a term--painting shop and office signs; he's literate, has an education, collects books, but has to drum up customers and chase down payments.

Into this picture comes Daisy, a field agent for the controversial population control program India adopted at that time. We learn she refused a marriage arranged by her family, ran away, and discarded her more traditional name to become Daisy. She needs a sign painter, first for her own office in the town of Malgudi, then for branch offices and even public informational billboards. It's a big opportunity for Raman, and they're much thrown together.

Raman had earlier turned down a marriage that came with a substantial dowry, but he falls in love with Daisy almost immediately; Daisy seems interested in Raman for more than his sign-painting, and though neither of them think they're interested in marriage they start stumbling closer to it. Does it happen? Well. You'll just have to read it and find out, won't you? ;-) It is a short novel.

Graham Greene says in a review of a different, earlier Narayan novel, "All Mr. Narayan's comedies have had this undertone of sadness." It's true of this one, too.

Most of Narayan's novels are set in the imaginary town of Malgudi; this is a late entry in his series, which by the time this one came out had been going on for forty years. It's the first I've read. Not the last.