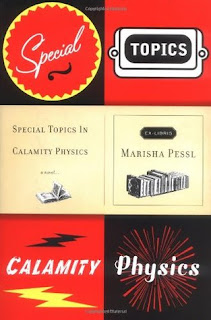 We first see Blue van Meer, the narrator and heroine of Special Topics in Calamity Physics (2006) as a Harvard undergraduate. Her opening sentence is "Dad always said a person must have a magnificent reason for writing his or her Life Story and expecting anyone to read it." But Blue has cause now.

(The Other Reader is a Yalie.)

It's not a tragedy exactly, and it's a funny one if it is, but definitely some tragic things happen. Blue sets out to tell us about finding the body of her (private prep) high school teacher, but flashes back first to tell us about the death of her mother. For six years or so after her mother's death, Blue and her father bounce around from one school to another; her father accepts any four-month appointment as a visiting professor he can find; Blue wonders if this is because he couldn't face up to the death of his wife.

But then she decides that wasn't the full explanation.

They pitch up in the fictional Stockton, NC, where she will attend the St. Gallway School for the entirety of her senior year. She's drawn into a circle of students around the film teacher Hannah Schneider, a circle she doesn't entirely seem to belong in because Blue is an egghead-y reader type and the other students in the circle are not. It's Hannah Schneider's body Blue stumbles across on a camping trip.

Was Schneider murdered or did she commit suicide? And in any case why? We learn something about the why by the end, but the basic question of what exactly happened is left somewhat uncertain. But the real relationship in the story is that of Blue and her father. The ending is definitely a surprise and has a real payoff, though, for my money, it took a little long to get there and then skimmed a bit what should be the emotional heart of the story.

But the reason to read the book is the prose. Blue is a voracious reader with a professor father who seems to half imagine he's raising a second J. S. Mill. Blue structures her story around a reading list and she can scarcely get through a sentence without citing a book, some of which are real and some of which are, well, not:


There was, too, the supremely itchy feeling I'd seen her somewhere before, when she had a similar eggshell haircut--a feeling so persistent, the next day, sunny and freezing, when Leulah dropped me off at home, I found myself weeding through some of the contemporary biographies in Dad's library, Fuzzy Man: The Life and Times of Andy Warhol (Benson, 1990), Margaret Thatcher: The Woman, The Myth (Scott, 1999), Mikhail Gorbachev: The Lost Prince of Moscow (Vadivarich, 1999), flipping to the centers and inspecting the photographs.

It strikes me as a suitable enough style for who the narrator is--a hyper-literate undergraduate--but your mileage may vary, and the jokiness of the titles is uneven. (The idea of Andy Warhol as Fuzzy Man works for me, but not all of them do.)

She also uses a lot of similes in her style, mostly successfully, I'd say: "The question hung in the air like a national flag with no wind." Or, of a sometime boyfriend: "...the kid who was like a cafeteria, so rectangular and brightly lit there wasn't a millimeter of exciting murk..."

Anyway, fun and with substance, too. Another book I could and should have read a while ago, but better late than never..., prompted by Adam's #TBR2019RBR challenge: 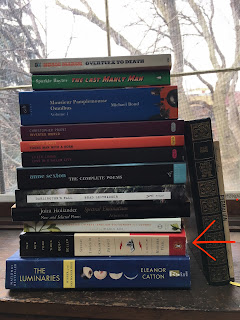