Poem For A Thursday: Brooks 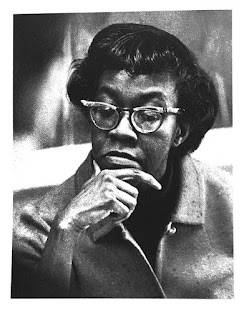 She didn't leave a tangle in.
Her comb found every strand.
Sadie was one of the livingest chits
In all the land.

When Sadie said her last so-long
Her girls struck out from home.
(Sadie had left as heritage
Her fine-tooth comb.)

Maud, who went to college
Is a thin brown mouse.
She is living all alone
In this old house.

My spellchecker doesn't like "livingest," but I love that word.

This is from Gwendolyn Brooks' first book, A Street In Bronzeville, of 1945. Bronzeville is a neighborhood on the near south side of Chicago, historically black and, by the standards allowed for African-Americans, middle-class. There's not much of it left any more, I think, what with various urban renewal projects.

I was a kid when Gwendolyn Brooks was appointed Poet Laureate of Illinois, and so I guess I've always known of her, but I'm quite sure the poem we were generally given at the time was "We Real Cool" about the dangers of skipping school...

Jennifer at Holds Upon Happiness is featuring Maggie Smith this week.
Posted by reese at 6:41 PM