Ellis Peters' Fallen Into The Pit (Not Brother Cadfael) 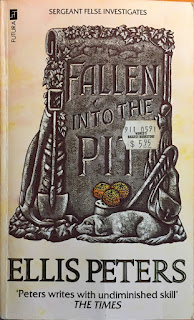 Ellis Peters wrote another mystery series before the Brother Cadfael ones started; it's set in contemporary England and features Inspector George Felse, often assisted by his son Dominic, his wife Bunty, and not infrequently by Dominic's current girlfriend. It's a family affair.

This is the fourth of the Felse mysteries I've read and it's the first in the series, from 1951.

The war hasn't been over long when this takes place, and a German P.O.W. named Helmut Schauffler, is still in England, working on farms and waiting to be repatriated. Helmut insists he was just an innocent soldier, and all that Nazi stuff never meant anything to him, but we quickly learn that's not true, and he's slyly hiding his real white supremacist/anti-Semitic feelings. Well, everybody in the town knows, too, and when he's discovered murdered, there are plenty of suspects. High on the list is Chad Wedderburn, now the Latin master, but recently a ruthless Army commando.

It's Dominic and his not-quite girlfriend Pussy (they're both thirteen in this one) who stumble on the body, and from that moment Dominic thinks of it as his murder, even though his father tells him quite forcefully to stay away. A second murder complicates things--Dominic is the last person to see the victim alive except for the murderer--and it ends with a trap sprung on the perpetrator and some nice suspense.

I started reading the Felse mysteries when I was nearly out of Cadfaels, and they are a pretty good substitute. They're perhaps not quite as charming as her better-known series, but still a lot of fun. You will know, if you're at all a reader of Peters, that since Chad Wedderburn is in love with Io the barmaid, and she loves him back, there is no way Wedderburn will turn out to be the murderer.

That said, this is the first of the series. Peters was no tyro when she wrote this, but she would get better. This would be stronger if it were fifty pages shorter, and the identity of the murderer was signalled much earlier than it needed to be. Wikipedia tells me that it was ten years until the next Felse came out, and her style had changed substantially between the two, and I think, for the better. No need to read them in order.

Another book I read from Ellis Peters' Felse mysteries.

An entry for the Gold card in the My Readers' Block vintage mystery challenge:
Where. Set in a small village. 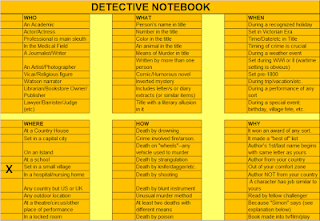