Well, perhaps it was just another empty invention--there are certainly fables enough in this world. And yet, even if the story isn't true, it does have some grain of sense and instruction to it, and it's entertaining as well, so it's worth the telling. 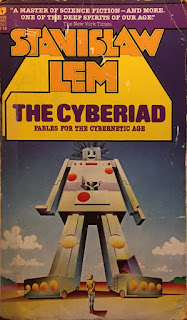 I pulled Stanislaw Lem's The Cyberiad off the shelf for the #1965Club, but didn't finish it in time. I read enough of it, though, to make me certain I needed to reread it.

I likely first came across Stanislaw Lem (and Borges and Raymond Smullyan and Thomas Nagel and, and, and...) when I read The Mind's I, (1981) edited by Richard Hofstadter and Daniel Dennett. It includes three stories by Lem, including two that come from this book. So, these are stories that give mathematician/philosophers something to talk about, "some grain of sense and instruction." But then they are entertaining, too.

Trurl and Klaupacius are constructors, that is they build intelligent machines to solve various problems. Mostly these are problems that didn't need solving, like Trurl's machine capable of creating everything that begins with the letter N. That makes it sound science-fiction-y, and it is, and quite possibly silly, which it is, too, though in a good way; but these are also fables, as the subtitle says. This may be a universe with robots, but it also has pirates and princesses and (repeatedly) kings who commission something from Trurl and then refuse to pay. So the proud are pulled down and the lowly exalted, generally, except when they ain't...and in any case it makes a good story.

Many of the stories in this are satirical in intent. Stanislaw Lem died at the age of 84 in 2006 in Poland, and so most of his career and, I assume, all of these stories, were written under the former Communist regime. Now I know from other things of Lem's I've read, he's capable of satirizing capitalism with perfect aplomb, but really, were the Polish censors completely asleep? Or did they simply not care about science fiction?


"Revolutionary solutions, on the other hand, boil down to either the Carrot or the Stick. The Stick, or bestowing happiness by force, is found to produce from one to eight hundred times more grief than no interference whatsoever. As for the Carrot, the results--believe it or not--are exactly the same,..."

This from a story in which Klaupacius assists a hermit in hunting down the population with the H. L. P. D., the Highest Level of Possible Development, in order to bestow human (and robotic) happiness throughout the universe. The hermit, undeterred, makes such a botch of things, he's stuffed in a cannon and fired across the galaxy to get rid of him.

The translator Michael Kandel is justly praised for his translations of Lem, and this one is full of brio; there are crazy, wonderful puns and poeticisms, just the sorts of things that are usually labelled untranslatable.

This will do for Poland for my European Reading Challenge, hosted by Gilion at Rose City Reader.