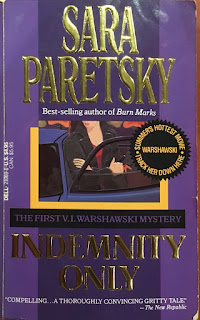 Sara Paretsky's Indemnity Only (1982) is the first V. I. (Victoria or Vic) Warshawsky mystery. It, together with Sue Grafton's Kinsey Millhone series, were the beginning of the modern female P.I. mystery movement. The series takes place in Chicago, and since I'm going to Chicago in a few days...

The setup is this: Warshawsky is hired to find somebody's daughter, except her client doesn't give his real name, and doesn't tell her the daughter's real name either. When she goes to follow the one lead she's given, she finds a dead body, clearly murdered by a pro. She figures she's been had. But not for long.

She ends up in the middle of an insurance fraud scheme, an unholy alliance of labor bosses, insurance executives, bankers, and the mob. (Well, it is Chicago we're talking about...we're only missing a politician or three...) Vic sorts out the mystery--its outlines are never much in doubt--its real and considerable suspense is in how she sorts the goons and gets the goods.

She compares herself twice to Lord Peter Wimsey, but the final scene is straight out of The Maltese Falcon.

Quite a lot of fun.

I usually think of Vic as a Southsider, and the backstory has her raised there, but she lives near Belmont and Halsted in Chicago on the north side--where I lived for two years in my twenties. And she's not much of a Southsider, because she's a Cubs fan.

Another entry for My Reader's Block Vintage Mystery Challenge.

Silver. Why: Author from your country. (Your state, your city, even your major intersection.) 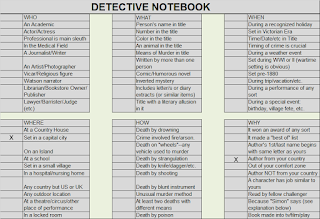