Poem For A Thursday: Sill 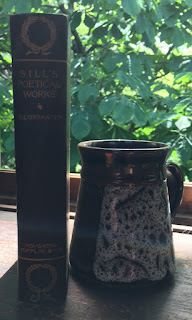 The royal feast was done; the King
Sought some new sport to banish care,
And to his jester cried: "Sir Fool,
Kneel now, and make for us a prayer!"

The jester doffed his cap and bells,
And stood the mocking court before;
They could not see the bitter smile
Behind the painted grin he wore.

He bowed his head, and bent his knee
Upon the monarch's silken stool;
His pleading voice arose: "O Lord,
Be merciful to me, a fool!

"No pity, Lord, could change the heart
From red with wrong to white as wool;
The rod must heal the sin: but, Lord,
Be merciful to me, a fool!

"'T is not by guilt the onward sweep
Of truth and right, O Lord, we stay;
'T is by our follies that so long
We hold the earth from heaven away.

"These clumsy feet, still in the mire,
Go crushing blossoms without end;
These hard, well-meaning hands we thrust
Among the heart-strings of a friend.

"Our faults no tenderness should ask,
The chastening stripes must cleanse them all;
But for our blunders--oh, in shame
Before the eyes of heaven we fall.

"Earth bears no balsam for mistakes;
Men crown the knave, and scourge the tool
That did his will; but Thou, O Lord,
Be merciful to me, a fool!"

The room was hushed; in silence rose
The King, and sought his gardens cool,
And walked apart, and murmured low,
"Be merciful to me, a fool!"

Edward Rowland Sill was born in Connecticut, lived most of his adult life in California, where he was professor of English at the nascent University of California, Berkeley, and died young in 1887.

Sill is, perhaps, a bit more optimistic than I am at the moment: the court is hushed and the king affected by the prayer. Ah, well. We all live in hope.

This was one of my father's favorite poems, along with the Rubaiyat of Omar Khayyam, Elegy Written in a Country Churchyard, and Poe's Eldorado.

Jennifer is featuring a lovely Judith Viorst poem this week.
Posted by reese at 6:13 PM