Poem For A Thursday: Hass 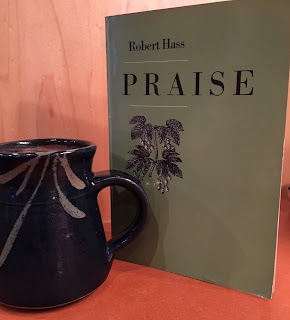 All the new thinking is about loss.
In this it resembles all the old thinking.
The idea, for example, that each particular erases
the luminous clarity of a general idea. That the clown-
faced woodpecker probing the dead sculpted trunk
of that black birch is, by his presence,
some tragic falling off from a first world
of undivided light. Or the other notion that,
because there is in this world no one thing
to which the bramble of blackberry corresponds,
a word is elegy to what it signifies.
We talked about it late last night and in the voice
of my friend, there was a thin wire of grief, a tone
almost querulous. After a while I understood that,
talking this way, everything dissolves: justice,
pine, hair, woman, you and I. There was a woman
I made love to and I remembered how, holding
her small shoulders in my hands sometimes,
I felt a violent wonder at her presence
like a thirst for salt, for my childhood river
with its island willows, silly music from the pleasure boat,
muddy places where we caught the little orange-silver fish
called pumpkinseed. It hardly had to do with her.
Longing, we say, because desire is full
of endless distances. I must have been the same to her.
But I remember so much, the way her hands dismantled bread,
the thing her father said that hurt her, what
she dreamed. There are moments when the body is as numinous
as words, days that are the good flesh continuing.
Such tenderness, those afternoons and evenings,
saying blackberry, blackberry, blackberry.

Robert Hass is an American poet born in 1941, and this, from his second book of poetry, is undoubtedly his most famous poem.

Jennifer at Holds Upon Happiness has one of the great Auden poems this week.
Posted by reese at 9:58 PM