I'm not really sure how to say anything about graphic novels, so I'm mostly just going to "quote" from Jason Lutes' wonderful Berlin, a graphic novel about the last years of the Weimar Republic, before Hitler's rise to power. He completed it last year after starting in 1996, and it consists of 24 issues, gathered subsequently into three books, before being released in a single volume last year. I came across it in this review by Jeet Heer from earlier this year.

The two main characters are Kurt Severing, a reporter whose editor is the historical figure Carl von Ossietzky. Here Severing is being berated by a communist friend for his hope that a non-violent solution can still be found:

The other major character is Marthe Müller, who comes from Köln to Berlin to be an art student, but also to experience the life of the city:

It was easier for me to get the three individual volumes than the one omnibus from my library, and though I was interested from that first review, I only put the hold on the first one initially, and I've had to return it. But I was convinced by the series from a moment in the first volume when Severing walks into his editor's office: there's a desk with a full ashtray on it, and then a number of smaller panels where we see full ashtrays also on his bookcase, the window sill, etc. That was a man under stress. But I can't show you the picture anymore.

There are numerous other characters as well, representing both the political right and the left, Jews, Lesbians and gays, the spectrum of what we think of as Weimar period Berlin.

I know a little but not a lot about the period, but it fits with one's sense from things like Goodbye to Berlin. I was chuffed to see this panel: 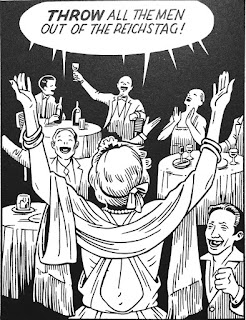 because I knew that song from the Ute Lemper album of twenty years ago:

Highly recommended. Interesting, fun, and in these times, just a little bit scary.
Posted by reese at 3:12 PM