Russell's A History of Western Philosophy

"Many histories of philosophy exist, and it has not been my purpose merely to add one more to their number. My purpose is to exhibit philosophy as an integral part of social and political life: not as the isolated speculations of remarkable individuals, but as both an effect and a cause of the character of the various communities in which different systems flourished. This purpose demands more account of general history than is usually given by historians of philosophy."


"Philosophy, as I shall understand the word, is something intermediate between theology and science. Like theology, it consists of speculations on matters as to which definite knowledge has, so far, been unascertainable; but like science, it appeals to human reason rather than to authority, whether that of that of tradition or that of revelation. All definite knowledge--so I should contend--belongs to science;..."

-from the Introductory [Yes, that's what he calls it.] 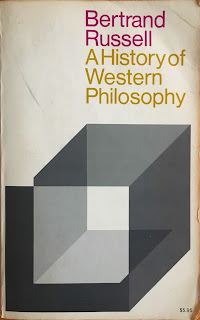 Some years ago I was beginning to collect the individual volumes of A History of Philosophy by Frederick Copleston, S. J., and a friend remarked, "Why would you read that? Aren't you worried about bias?" and suggested Russell's A History of Philosophy. I sputtered an incoherent argument, but the basis of it was meant to be there's always bias, and we'll need to read critically, though I doubt I actually managed that very well in conversation...But I did get a copy of Russell, too, when I saw it in some used bookstore, though for a long time it lingered unread or just browsed in, as have for that matter most of the volumes of Copleston. But no longer!

As for the bias of Frederick Copleston, S.J., I'm partly educated by the Jesuits, so I am presumed able to see through their wiles, or have experience of them at any rate, or, possibly, am so compromised by them, it's hopeless anyway. You can decide.

So: I've had this longstanding, but at best occasional, desire to have a working overview of philosophy in my head, and have even been known sometimes to do something about it. Russell's book turns out to have been a good addition.

A History of Philosophy is based on lectures Russell gave at the Barnes Foundation in Philadelphia in 1942 and 1943. The book first came out in 1945, and is cited as one of the books that led to his winning the Nobel Prize in Literature of 1950.

A recent review I read of Witcraft by Jonathan Rée said of that book: "Rather than whisking us from one prominent philosophical peak to another, it spends a lot of time wandering the fertile valleys in between them." Russell's is very definitely a work of the peaks. There are a number of philosophers whose names I know (a sign they must have some importance, right?) who don't get mentioned at all.

On those he does mention, he's generally quite lucid, and often witty. For instance, what he says about Kant was intelligible to me, which feels like a major accomplishment. I doubt it's a full picture of Kant, but that he can say something, anything, about das Ding-an-sich, and have it make sense to me, is a very good start, and likewise about a number of other quite esoteric authors, such as Hobbes, Spinoza, Plotinus, Locke. However, I'm not going to summarize Russell's summaries; you'll just have to take my word for it, or try it yourself. Which I do recommend.

There are flaws. Some of these are due to its date, 1945. He says at one point, we can't know that Mycenae and Tiryns were actually Greek; well, yes we can. But he sent me off to Wikipedia to remind myself that Michael Ventris didn't actually solve Linear B until the 1950s, so it is true that Russell could not know that Mycenae was actually Greek. I'm a lapsed classicist, so I'm more attuned to this period, but even in the field of classical studies we do learn things yet. Russell's instincts were relatively sound, I thought. While he couldn't have known about E. R. Dodd's book The Greeks and the Irrational, he would not have been shocked to discover that the Greeks were not paragons of reason, as so often thought.

A bit more problematic is his attitude toward German philosophers. Well, he was writing in the first half of the 1940s, with all that implies. He doesn't entirely accept Kant, but he likes Kant. On Hegel, he's much more condemnatory. I have never managed even a page of Hegel, but was Hegel personally responsible for Naziism? Hmm, I have my doubts. As for Nietzsche, Russell is still under the influence of the idea of Nietzsche of the first half of the 1900s. Whatever one might make of Nietzsche, he is not the same person as his avowedly Nazi sister.

Russell also tries to be fair to the great Catholic philosophers, such as Augustine and Aquinas, but, I'm afraid, can't quite manage it.

And, while I definitely appreciate his intention to place the philosophers into their historical and social context, it does lead to some rather potted recounting of history. His treatment of the dark ages and early middle ages is particularly unsubtle.

Existentialism, which was underway when Russell was writing this, though perhaps not yet in full flower, is completely ignored by him. No Kierkegaard, no Heidegger, no Sartre.

But that's now over-emphasizing the negative. What really struck me about this was how readable it was, and that's why I would particularly suggest it if you're interested in a history of philosophy. Sure, there are flaws. That's inevitable in any work with such a large remit. But this is the book you might actually finish, and, in a history of philosophy, there's a whole lot to be said for that.

Some things that amused me and got copied to my commonplace book:


"The typical romantic removes the bars and enjoys the magnificent leaps when the tiger annihilates the sheep. He exhorts men to imagine themselves tigers, and when he succeeds the results are not wholly pleasant."

"There has been a tendency to think that everything Xenophon says must be true, because he had not the wits to think of anything untrue. This a very invalid line of argument."

"Aristotle's metaphysics, roughly speaking, may be described as Plato diluted by common sense. He is difficult because Plato and common sense do not mix easily."

"There is, in fact, an element of sour grapes in Stoicism. We can't be happy, but we can be good; therefore let us pretend that, so long as we are good, it doesn't matter being unhappy. This doctrine is heroic, and in a bad world, useful, but it is neither quite true, nor, in a fundamental sense, quite sincere."

"Part II [of Hobbes' Leviathan] ends with the hope that some sovereign will read the book and make himself absolute--a less chimerical hope than Plato's, that some king would turn philosopher."

"The necessity of believing without knowledge, nay, often upon very slight grounds, in this fleeting state of action and blindness we are in, should make us more busy and careful to inform ourselves than to restrain others."

Highly recommended, if it's a thing you're looking for.

And there goes one of the larger books on my Classics Club list.