(Belated) Poem For A Thursday: Lindsay 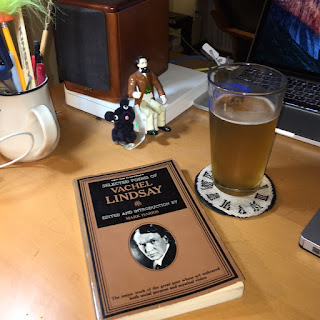 
Sleep softly...eagle forgotten...under the stone.
Time has its way with you there, and the clay has its own.

"We have buried him now," thought your foes, and in secret rejoiced.
They made a brave show of their mourning, their hatred unvoiced.

They had snarled at you, barked at you, foamed at you day after day.

Now you were ended. They praised you,...and laid you away.

The others that mourned you in silence and terror and truth.
The widow bereft of her crust, and the boy without youth,
The mocked and the scorned and the wounded, the lame and the poor
That should have remembered forever,...remember no more.

Where are those lovers of yours, on what name do they call
The lost, that in armies wept over your funeral pall?
They call on the names of a hundred high-valiant ones,
A hundred white eagles have risen the sons of your sons,
The zeal in their wings is a zeal that your dreaming began
The valor that wore out your soul in the service of man.

Sleep softly,...eagle forgotten...under the stone
Time has its way with you there and the clay has its own.

John Peter Altgeld was elected governor of Illinois in 1892. He resisted the use of federal troops to combat the Pullman strike and pardoned the (surviving) Haymarket rioters. He was one of the first progressive politicians elected to office.

Vachel Lindsay was an American poet who died in 1931.

Jennifer has a great Robert Frost poem this week.
Posted by reese at 1:00 AM