Poem For A Thursday: Clough 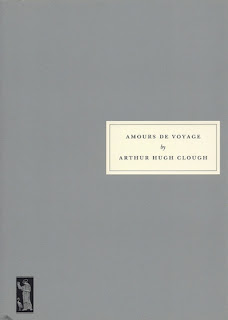 Over the great windy waters, and over the clear crested summits,
Unto the sun and the sky, and unto the perfecter earth,
Come, let us go,--to a land wherein gods of the old time wandered,
Where every breath even now changes to ether divine,
Come, let us go; though withal a voice whisper, "The world

that we live in,
Whithersoever we turn, still is the same narrow crib;
'Tis but to prove limitation, and measure a cord, that we travel;
Let who would 'scape and go free go to his chamber and think;
'Tis but to change idle fancies for memories wilfully falser;
'Tis but to go and have been."--Come, little bark! let us go.

Umm. The selection of this is feeling a little over-determined for me at the moment. (1.) I recently learned that Amours de Voyage was reissued by Persephone--I don't see Persephone volumes here very often. But I would have reread it for the recent Persephone reading month. (2.) I'm currently reading Hermann Broch's The Death of Virgil in the English translation of Jean Starr Untermeyer, and he apparently wanted the Vergil quotes in the translation to be in dactylic hexameter. It's clear to me Untermeyer went off and studied Clough for how to write dactylic hexameter in English. A very good choice, I'd say. And (3.) we're thinking about our own trip to Italy in the late fall, which is where Clough's voyaging lovers go. (From England to Italy, over the great windy waters and the clear crested summits, while poetic, is also literal. It doesn't work quite as well from here: more water, less mountain. Though given the likelihood of changing planes in Frankfurt...)

Arthur Hugh Clough was a British poet who died in 1861. Amours de Voyage is a story poem in five cantos about a group of young English people who travel to Italy in 1849, the time of Garibaldi's defense of the Roman republic. It's about 40 pages in my edition. Except for the proem to each canto, written in elegiacs, it consists of a series of letters in dactylic hexameter written by the young people in Italy to their friends back home in England; various of them fall in love, with decisions to be made about that. I really find it very good.