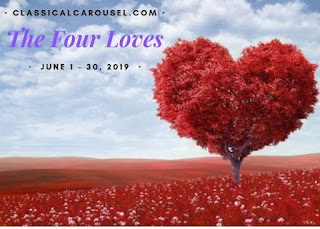 Cleo at Classical Carousel organized a readalong of C. S. Lewis' The Four Loves, which, even though I knew my June was going to be a bit discombobulated, I was excited to join. Cleo has written a series of lovely, thoughtful, and informative posts that were a great help.

And, though I suspect this comes a little late, and I only found it three-quarters through my reading, I found these annotations (by searching for the quote that turned out to be Masefield) to be helpful.

So, having just given you those far more useful and informative posts, I have nothing left to say, right? Actually, kind of...You're better off with those posts than me. But I'll squeeze in a few words around the margins anyway...because a blogger can hardly be usefully silent...

I was dimly aware--I was a Classics major--about the distinction in the Greek language between types of love (storgé, philia, eros, agapé) that we, in English, lump together under the one word Love. Lewis is quite lucid about this, and in particular, I found Lewis' distinction between Need-love and Gift-Love (not concepts that necessarily occurred to the Greeks) insightful. Need-love is that form of Love where we expect something--a child needs nourishment from its mother, and the child loves mother for it; Gift-love is that more purely beneficent form of love that just gives--a mother nourishing that child. (Though more on that later.)

Now Lewis, a Christian, sees a sort of progression in the four types of love: Storgé (Affection) is a more mechanical form than its successor, Philia (Friendship). In turn, Philia isn't as strong a force as Eros (Erotic love,) and the summit is Agapé, sometimes translated as Charity (Caritas in Latin,) though I'd say a bit more complicated than that. (And Lewis would agree.) Lewis didn't express himself this way, but I rather wonder if his un-Greek, but useful terms Need-love and Gift-love could helpfully express the progression. The more advanced forms of love have a smaller portion of Need-Love and more Gift-love. In fact, I might say that any type of love expressed by actual humans has an admixture of Need-love and Gift-love; only divine love is purely Gift-love. Lewis doesn't say that, but I think he'd agree. Human loves, even the largely Gift-love forms of human love, such as charity or the love of a parent for a child, have some Need-love in them: my name will be glorified if I donate the money that leads to a cure for cancer; if I look after Junior now, Junior will help me when I am old and decrepit. Lewis by no means condemns those, but neither are those purely divine forms of love.

Now that I've speculated about what Lewis might have said (but didn't)...😉...I thought I'd also make an observation about the sort of thing he did say. Because he does see that all of his forms of love have both good and bad forms, he tries to distinguish what's good and what's bad. Mostly I would agree with his distinctions. For example one of his early forms of love (Love for the Sub-Human he categorizes it as) is patriotism. Now patriotism these days is a thing I'm particularly suspicious of--too often it seems to be "the last refuge of a scoundrel" and all that. Now Lewis is perfectly well aware there are bad manifestations of patriotism, and he identifies them pretty much as I would identify them, though I do think memorializing Waterloo may be a bit more ambiguous than Lewis seems to think. But where I do wonder is how can we tell the good forms apart from the bad forms? Now Lewis, as I said, mostly distinguishes them as I would, and (*naturally*) that marks him as sensible person. But if somebody should insist the proper form of patriotism involves liking only people of my ethnicity, how do I demonstrate that isn't a proper of patriotism? Unclear.

Later he discusses what are sometimes characterized as 'neurotic' forms of love, though he doesn't like that terminology. Fair enough. I'm not very fond of Freud myself. Freud was more highly rated in 1960, the year Lewis' book came out, than today, though, and it's quite easy now to see Freud as less helpful. Lewis says he might sort through some of the more difficult issues with his spiritual adviser, but that also strikes me as a not very satisfactory answer; spiritual advisers come in all stripes, and he doesn't seem to me to give any guidelines as to how to distinguish the good from the bad in spiritual advisers as well as in manifestations of love.

Well, Lewis doesn't have to answer all the questions--it is a short book--and I certainly don't have the answers myself; only to note that there are still some questions, and, in any case, this post has taken me quite long enough (!) to write.

Thanks to Cleo for prodding me to read this fascinating book!