Poem For A Thursday: The Owl Writes A Detective Story 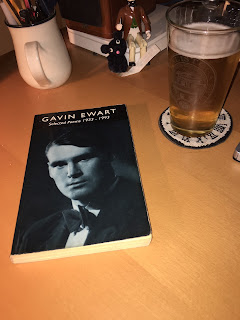 The Owl Writes A Detective Story

A stately home where doves, in dovecotes, coo--
fields where calm cattle stand and gently moo,
trim lawns where croquet is the thing to do.
This is the ship, the house party's the crew:
Lord Feudal, hunter of the lion and gnu,
whose walls display the heads of not a few,
Her Ladyship, once Ida Fortescue,
who, like his Lordship very highborn too
surveys the world with a disdainful moue.
Their son--most active with a billiard cue--
Lord Lazy (stays in bed till half past two).
A Balkan Count called Popolesceru
(an ex-Dictator waiting for a coup).
Ann Fenn, most English, modest, straight and true,
a very pretty girl without a sou.
Adrian Finkelstein, a clever Jew.
Tempest Bellairs, a beauty such as you
would only find in books like this (she'd sue
if I displayed her to the public view--
enough to say men stick to her like glue).
John Huntingdon, who's only there to woo
(a fact, except for her, the whole house knew)
Ann Fenn. And, last, the witty Cambridge Blue,
the Honourable Algy Playfair, who
shines in detection. His clear, 'View halloo!'
puts murderers in a frightful stew.

But now the plot unfolds! What déjà vu!
There! In the snow! -- The clear print of a shoe!
Tempest is late for her next rendez-vous,
Lord Feudal's blood spreads wide--red, sticky goo
on stiff white shirtfront--Lazy's billet-doux
has missed Ann Fenn, and Popolesceru
has left--without a whisper of adieu
or saying goodbye, typical mauvais gout!
Adrian Finkelstein, give him his due,
behaves quite well. Excitement is taboo
in this emotionless landowner's zoo.
Algy, with calm that one could misconstrue
(handling with nonchalance bits of vertu)
knows who the murderer is. He has a clue.

The Other Reader's favorite poem--oh, perhaps not entirely, but definitely a favorite. As a habitual reader of mysteries, it may work for me, too, and then especially when read aloud...

Gavin Ewart (1916-1995) was a British poet. Not always comic verse, but often. Since one of my grandfather's two given names were Rob and Roy, I've always appreciated this poem by him as well:

The Irish are great talkers,
persuasive and disarming.
You can say lots and lots
against the Scots--
but at least they're never charming!


I'm once again in an Internet-free zone as this appears, so I can't yet, but do go see the original Poem for a Thursday at Holds Upon Happiness.  I will as soon as I can.
Posted by reese at 2:00 PM