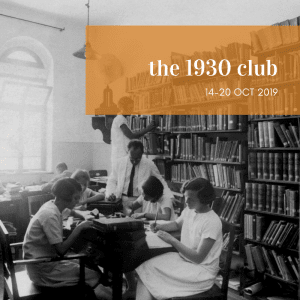 It's year book club time again and this year it's 1930. This semi-annual club is hosted at Stuck in a Book and Kaggsy's Bookish Ramblings; the idea is participants read books set in the given year and blog about them; it gives a fun overall picture of the year in question. Naturally I used this as an excuse to pile up books: 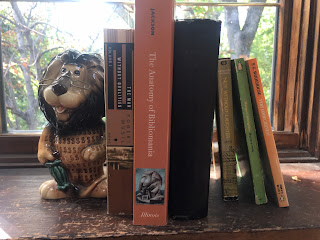 We've got some large, medium, and small choices there. The first volume of The Man Without Qualities by Robert Musil and Holbrook Jackson's The Anatomy of Bibliomania count as large; J. B. Priestly's Angel Pavement, which looks bigger than it is, and Not Without Laughter by Langston Hughes are my mediums; and the shorties are Margery Allingham's Mystery Mile and P. G. Wodehouse's story collection Very Good, Jeeves.

The pile is aspirational, of course,... 😉and, in particular, I'm unlikely to read both the larges. I'm tempted by Musil, which was the subject of a series of great blog posts at the Bookbinder's Daughter, but it would be a reread for me. The appeal--to me--of a book titled The Anatomy of Bibliomania is not hard to figure out, and, well, I've already started it.

Also, because I feel like I should deprecate rereads at the moment, Miss Marple, Ellery Queen, Sam Spade, Charlie Chan, and Simon Templar all stayed on their shelves. But I read Enter The Saint recently enough that I do have a blog post for it.

Thanks to Simon and Kaggsy for hosting!

Which look good to you?
Posted by reese at 4:27 PM