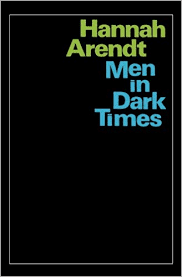 Men in Dark Times is a collection of Hannah Arendt's occasional articles that came out in 1968. The pieces were from the previous fifteen years and cover figures such Karl Jaspers, Pope John XXIII, Walter Benjamin, Hermann Broch, Bertolt Brecht. Despite the title two women are included: Rosa Luxembourg and Isak Dinesen.

Arendt is probably best known for her great book Eichmann in Jerusalem, her controversial report on the trial in 1961 of Adolf Eichmann for his part in the Holocaust. It's the source of the phrase, 'the banality of evil.' She was also a political philosopher and a scholar of totalitarianism.

I pulled this off the shelf to read her essay on Hermann Broch because I was still thinking about The Death of Virgil, but that was actually the least interesting essay in the book: it's the introduction a volume out of the collected essays of Broch, and it was simply too specialized for me.

Some of the other essays are slender: she has some interesting ideas about Dinesen, for instance, but the context was a biography of Dinesen she was reviewing that she didn't think was very good, and that distracted her from the more interesting parts, I thought. Half the essays are translated from German.

But the essays on Benjamin, and particularly on Brecht, were very good. That on Benjamin was from a foreword to the collection of Benjamin essays titled Illuminations, but I thought it would serve as a pretty good introduction to Benjamin, even if you didn't go on to read that particular book. And her essay on Brecht was even better: it was a piece from the New Yorker ten years after Brecht died, and was looking at the state of his reputation at that time, the relationship between his poetry and his politics. Brecht died in a somewhat bad odor; he had been chased out of the United States after World War II for his (never very doctrinaire) communism, and further chased out of West Germany, ending up in East Germany. He was unhappy and unproductive there and most likely afraid in those last years of Stalin. Arendt, the great scholar and opponent of all totalitarianism, sensitively considers the relationship of the work to the political morality of the artist. I wondered to what extent this also reflected her thoughts on Heidegger, who had been her teacher--and lover--in between the world wars, but was later a Nazi supporter.

Recommended particularly for the essay on Brecht.
Posted by reese at 9:37 PM